Service without honour: Chanderpaul continues to protest his expulsion 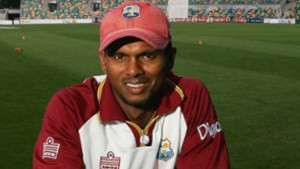 MIAMI, USA (CMC) — Former West Indies middle-order batsman Shivnarine Chanderpaul is continuing to protest his unceremonious expulsion from the regional squad, saying he has given yeoman service without being honoured.

Chanderpaul, 42, who was dropped from the West Indies squad before the series against Australia last year, says his departure “was not handled properly”.

The veteran left-hander was axed after a poor run of form that saw him make 183 runs at 16.63 in the 11 innings that followed his 30th and final Test century a few months earlier against Bangladesh.

“You’ve put in so many years. A lot of times you’ve been injured and you still go out and play,” said the Guyanese cricketer, in an interview with ESPNcricinfo.

“A lot of times I went back home to Guyana injured from tours that I’ve been on for West Indies and go back home and play, and you give so much service for your country and to West Indies and on the back end you were not properly honoured for it.”

Chanderpaul, who boasts a career average of 51, has averaged just 16 from his last 11 innings.

Overall, however, he has scored 11,867 from 164 Tests, with 30 hundreds and is just 87 runs short of overtaking Brian Lara as the leading West Indies run-scorer of all time.

“I ended up getting the same treatment in the back end of it, where you are totally disrespected and you were not treated right, and you’ve given so many years of service to the Caribbean,” he complained.

“There’s nobody there to properly honour you and send you off properly, maybe like what Sachin [Tendulkar] got in India or some of the other players I’ve seen get a proper send-off. It was nothing like that. It hurt in the end because you’ve done so much for the West Indies.”

Chanderpaul played five games for Guyana in the last edition of the WICB Professional Cricket League (PCL), averaging 49.83 to help them to defend their title.

Considered a West Indies cricket legend, Chanderpaul insists that there has been a lack of gratitude for his service to the region but conceded that he was not the only one who received an undignified farewell.

“This is something that happened way back in the past, when I started my career with some of the senior players, maybe like [Courtney] Walsh and other guys, Desmond Haynes. These are things that happened to those guys and it was not handled properly.”