Serena and Venus into doubles semis 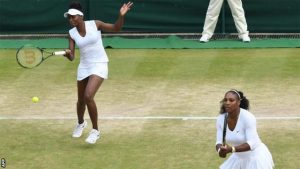 Serena Williams beat Elena Vesnina for a second time on Thursday to remain on course for a sixth Wimbledon doubles title alongside sister Venus. The Williams sisters beat Vesnina and fellow Russian Ekaterina Makarova 7-6 (7-1) 4-6 6-2 to reach the semi-finals.

Serena had already beaten Vesnina in the singles semi-finals, while Venus was beaten by Angelique Kerber. The Americans will meet German Julia Goerges and her Czech partner Karolina Pliskova for a place in the final.

The Williams sisters have already won five Wimbledon ladies’ doubles titles, the last of which came in 2012. Their path to a sixth has been eased slightly by a defeat for number one seeds Martina Hingis and Sania Mirza.

The defending champions were beaten 6-2 6-4 by Timea Babos and Yaroslava Shvedova. That was the first of two titles surrendered by Hingis on Thursday, who, along with partner Leander Paes, was beaten in the mixed doubles by Great Britain’s Heather Watson and Finnish partner Henri Kontinen.

Watson and Kontinen, in the third round after walkovers in each of the first two, won 3-6 6-3 6-2 to book a quarter-final with Scott Lipsky and Alla Kudryavtseva. (BBC Sport)