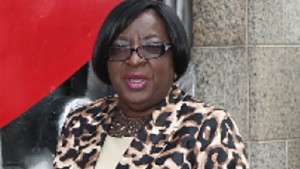 PORT-OF-SPAIN, Trinidad, Friday April 24, 2015 CMC – A senior public servant is demanding that a junior government minister issue a public apology as well as pay her damages for the injury she suffered following the broadcast of an interview given by the minister on television last month.

Hermia Tyson-Cuffie, who served as permanent secretary in the Ministry of the People and Social Development, said the minister, Vernella Alleyne-Toppin, had “falsely and maliciously made statements in relation to a question about whether you were advised to accept responsibility for the alleged abuse of a Government credit card”.

In 2012, Alleyne-Toppin, who was then the Minister of Tobago Affairs, said she paid back monies involved in use of a Government credit card and never deliberately misused the facility. The issue of Alleyne-Toppin’s usage of the credit card was raised in the House earlier by Opposition Leader Dr Keith Rowley.

In the pre-action protocol letter, dated April 22, in which a copy of the transcript of the interview was also enclosed, the senior public servant who is married to a candidate contesting the elections on behalf of the opposition, claimed that the embattled junior minister had by her words suggested that “Tyson-Cuffie used her position to provide (untruthful) information to the Mirror Newspapers and to Dr Rowley about you; that Mrs Hermia Tyson-Cuffie did not pay and/or reconcile the accounts for your credit card in dereliction of her duties” and “that Mrs Hermia Tyson-Cuffie had targeted you.”

The letter calls on the junior minister to take “as a matter of urgency” various measures including “publish in the next issue of two daily newspapers a full retraction and apology in terms to be approved by us on our client’s behalf; indemnify our client in respect of any costs which she may have incurred in this matter; pay to our client damages for the injury she has suffered to her reputation and for the distress and embarrassment caused to her.”

The letter stated that its aim was to “attempt to have this matter settled without recourse to legal proceedings.

“You or your attorney-at-law may contact the undersigned if you wish to resolve this matter,” the letter added.

Alleyne-Toppin, who last month caused a major uproar in the country when she suggested that Rowley was born as a result of his mother being raped as a child, told reporters she has not yet received the pre-protocol letter.