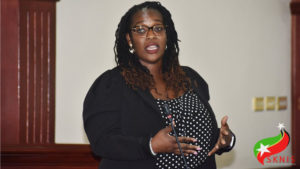 The Senator took the Team Unity Government to task for its high handed approach to entertainment and failing to consult with this sector during its writing of the Bill before being presented in Parliament.

“Entertainment is the only promised form of stimulus for the country at this time” she underscored.

Claiming that the Bill was not thoroughly prepared, due to numerous errors, Dr Clarke said there were double standards and conflict with what Government was saying and what it practiced