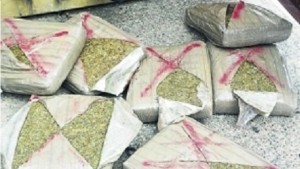 THE Senate is expected to complete the debate on the Dangerous Drugs (Amendment) Bill, often referred to as the Ganja Bill, which began last Friday, when it resumes at Gordon House today.

The debate was opened by Minister of Justice, Senator Mark Golding, and has so far included Senator Angela Brown Burke, mayor of Kingston, and fellow Government senator Wensworth Skeffery, as well as Leader of Opposition Business Senator Tom Tavares Finson.

The Bill is proposing a number of amendments to the Dangerous Drugs Act, enacted in 1948 and last amended in 1987, including that:

* Possession of two ounces or less of ganja be made a non-arrestable, ticketable infraction attracting a fixed monetary penalty payable outside the court system, which does not give rise to a criminal record;

* Failure to pay the monetary penalty is to be a minor offence, punishable in the Petty Sessions Court by an order for community service;

* Where the person found in possession of ganja in a small quantity is a minor, or an adult who appears to be dependent on ganja, the person is to be referred to the National Council on Drug Abuse (NCDA) by the police officer issuing the ticket;

* Prohibition of the smoking of ganja in public places, subject to specified exceptions; and a scheme of licences, permits and other authorisations to enable the establishment of a lawful, regulated industry for ganja for medical, therapeutic and scientific purposes, and the establishment of a Cannabis Licensing Authority.

The Bill also seeks to effect reform of the monetary penalties applicable under the Act.

Senator Golding said there will be discussions with the Ministry of Finance and Planning for portions of the revenues generated by the licensing of industry to go into a dedicated fund, to be used to provide financial support for a public education programme.

He said that despite the proposals, Jamaica remains committed to the fight against transnational drug trafficking and organised crime. “Save for the specific reforms that we have announced, the criminal sanctions for illicit activities involving ganja (will) remain as currently set out in the Dangerous Drugs Act,” he said.