Second juror says he was approached by colleague during Kartel case 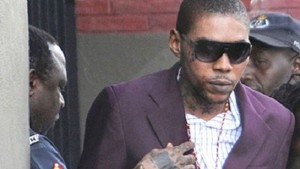 Kartel during his murder trial

ANOTHER juror from the Vybz Kartel murder trial testified yesterday that his fellow juror approached him three weeks after the trial started, stating that “we can’t find these men guilty”.

The juror, whose name cannot be published due to an order of Magistrate Maxine Ellis, testified that Livingston Cain told him that “we can’t find these me guilty because they are persons in the entertainment industry and they have families”.

However, the witness said he told Cain that he, too, could not see — at that point of the murder trial — anything on which the men could be convicted.

He gave the testimony during his evidence-in-chief in the trial before the Corporate Area Resident Magistrate’s Court.

But during cross-examination from Valerie Neita-Robertson, who is representing Cain, the witness said that Cain never offered him or asked him to do anything.

He, however, said that another juror, who was the first witness to testify in this case, told him that Cain was trying to get him to vote in a particular way but that he doesn’t remember much of the conversation.

He said that Cain did not participate much in the discussions of the jurors as it relates to the evidence presented in the Vybz Kartel murder case, but said that two weeks before the case came to an end Cain placed his views about the men’s innocence on the table for discussion.

The case is to continue on April 28.

The charges stem from allegations that between the start of Vybz Kartel’s murder trial in the Home Circuit Court on November 18, 2013 and the rendering of a verdict in the matter in March 2014, Cain tried to persuade his fellow jurors to return a verdict of not guilty and even offered the jury forewoman J$500,000 for a result in favour of Vybz Kartel and his co-accused.

Vybz Kartel (whose real name is Adidja Palmer), Shawn ‘Shawn Storm’ Campbell, Andre St John, and Kahira Jones were convicted in the high-profile case, while a fifth man — Shane Williams — was acquitted. The convicted men were sentenced to life imprisonment. They are currently appealing the case