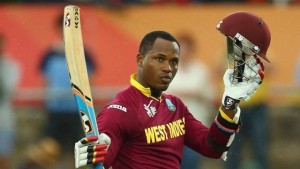 West Indies suffered their second batting meltdown in the space of 48 hours as they slumped to a 16-run defeat to Pakistan in the second Twenty20 International here Saturday, to meekly surrender the three-match series.

Asked to chase 161 for victory at the Dubai International Stadium, the Caribbean side looked anything but reigning World champions as they inexplicably collapsed to 144 for nine off their 20 overs, to suffer their second straight loss of the series following a similar disappointing outing on Friday.

Sunil Narine saved some face for the Windies with a cameo top score of 30 off 17 deliveries batting at number nine while Andre Fletcher chipped in with 29 but his was a pedestrian knock that required 37 balls, and fell far short of what was required.

West Indies were ripped apart by left-arm seamer Sohail Tanvir who snapped up three for 13 in a brilliant four-over spell and was supported by rookie speedster Hasan Ali who finished with three for 49.

Captain Sarfraz Ahmed had earlier guided Pakistan up to a challenging 160 for four off their 20 overs when he top-scored with a Man-of-the-Match, unbeaten 46 off 32 deliveries.

Sent in, Pakistan also benefited from opener Khalid Latif’s knock of 40 off 36 balls and the experienced right-hander Shoaib Malik’s invaluable 37 off 28 balls.

Sharjeel Khan fell cheaply for two at four for one in the third over when he dragged on to leg-spinner Samuel Badree, but two half-century stands then repaired the innings and propelled the hosts to the highest-ever total at the ground.

Latif struck three fours and a six as he added 54 for the second wicket with Babar Azam who scored 19, while Sarfraz and Shoaib combined in a 69-run, fourth wicket partnership which took the game away from West Indies.

Sarfraz produced a controlled innings, striking five fours and running sensibly between the wickets with Shoaib who counted three boundaries and a six before holing out in the deep in the final over.

Any hopes West Indies had of re-discovering their World Cup-winning form were quickly dashed as they slumped to 19 for three in the sixth over, with Sohail picking up two of the wickets to fall.

Johnson Charles (10) picked out Umar Akmal at long on off left-arm spinner Imad Wasim with the score on 12 in the third over and Evin Lewis was taken at slip by Sharjeel for three, edging a booming back foot drive at Sohail in the following over with just three runs added.