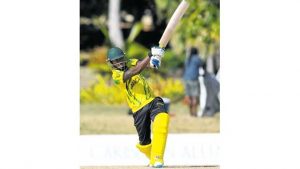 Jamaica Scorpions batsman Jermaine Blackwood on the go against the T&T Red Force in the first semi-final of the Regional Super50 Tournament at Coolidge Cricket Ground, yesterday

Chadwick Walton and Jermaine Blackwood notched 117 and 108 not out, respectively, for maiden List A hundreds. Rovman Powell (95) and Steven Taylor (88) both narrowly missed the three-figure mark as the Red Force bowlers erred miserably in line and length.

Chasing a daunting 435 runs to stand a chance of returning to the final, the Red Force were tumbled over for 142 .

Jason Mohammed top-scored with 62 not out. Powell, the medium pace, showed up his more illustrious counterparts in the Red Force bowling line-up with 5-36 off eight overs. The Scorpions’ opening fast bowlers Jerome Taylor and Reynard Leveridge supported Powell with 3-27 and 2-31, respectively.

The Scorpions will face the winner of today’s semi-final between Barbados Pride and Leeward Islands Hurricanes for the title on Saturday.

The Scorpions’ 434 is a record in regional 50-over cricket and the ninth highest List A total of all time.

The Red Force won the toss and asked the Scorpions to take first strike on a docile batting pitch surrounded by mostly short boundaries. They were soon made to regret the decision as Walton and Steven Taylor added a boundary-laden 174 runs for the first wicket.

While the batting was jaw-dropping, the bowling was desperately poor as too many full tosses and half volleys were offered up.

A large number of those were sent crashing over the boundary ropes. To compound matters, some of the full tosses were so high they were called ‘no balls’ which resulted in free hits.

Even after both were dismissed, the momentum carried throughout.

Blackwood and Powell continued the carnage toward the latter part of the innings, adding a shocking 163 runs off 91 balls for the third wicket.

Powell, chasing the hundred near the end, was bowled by pacer Ravi Rampaul. He faced only 45 balls.

The Red Force began frantically, but could not sustain the attacking approach against the incisive duo of Jerome Taylor and Leveridge.

Powell then entered the attack to wreck the lower and middle order.