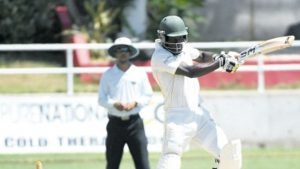 Jamaica Scorpions’ batsmen were again found wanting as Leeward Islands Hurricanes dismissed the hosts for 197 in the first innings of the ninth-round regional four-day game at Sabina Park.

But the hosts fought back with the ball in the final session of yesterday’s opening day to restrict the Hurricanes to 60-4 by close of play.

Former West Indies Under-19 player Keacy Carty, not out on 20, and wicketkeeper/batsman Jahmar Hamilton, on 17, are the batsmen set to take the crease when play resumes this morning at 10 o’ clock.

Scorpions’ leg break bowler Damion Jacobs was the architect of a top-order collapse, snaring three wickets as the Hurricanes slumped to 28-4.

In the Scorpions’ innings, the West Indies Test batsman Jermaine Blackwood looked in supreme touch in a top-score of 81, but none of his teammates reached 30 in yet another tepid batting display this season.

The Hurricanes’ pacer Sheeno Berridge, who only made his first-class debut last season, was easily the pick of the bowlers. The long-limbed swing bowler ended with 4-46.

Earlier, the Scorpions were sent to take first strike after the Hurricanes won the toss in sunny conditions. And the visiting team put in a disciplined effort in the field and with the ball as almost all the batsmen appeared short on confidence and competence on a dry pitch that appeared lacking in pace.

The left-hand opening pair of John Campbell and Assad Fudadin began well enough as they put on 41 runs, however, it was mostly downhill thereafter.

On a run-a-ball 28, Campbell cut crisply off pacer Jeremiah Louis’ short ball, but the critical flaw on the execution of the shot was that the ball went in the air long enough for 20-year-old Carty to catch low down, square on the off-side.

Berridge, getting appreciable swing away from the right-hander, also got in on the act. He drew wicketkeeper/batsman Chadwick Walton (nine) into a forward prod and the ball kissed the edge of the bat and was snapped by Devon Thomas at second slip.

It was 66-3 when Berridge produced a delivery to swing into the Fudadin and clip the inside edge en route to the stumps.

Left-hander Paul Palmer (eight) struck a boundary down the ground off the off-spinner Chaim Holder, but to the next ball he missed a loose drive towards the leg side and was bowled on the stroke of lunch.

Brandon King also briefly displayed his talent in a 51-run fifth-wicket stand with Blackwood with a few elegant strokes particularly through the off-side.

But he went tamely for just 20 when he reached wide of off-stump for drive at a Berridge delivery, but could only drag the ball onto his stumps. Derval Green (three) and Fabian Allen (three) were then dismissed by Berridge and Louis, respectively, as the score reached 174-7.

At the other end, Blackwood looked in top form, lofting trademark drives straight down the ground off pace and spin. But he gave his hand away when he backed away to gain room to cut an off-break from Holder. The flashing blade missed the ball and the stumps were left shattered. The 26-year-old plundered 10 fours and two sixes off 98 deliveries.

The rest of the batting folded as the Leeward Islands Hurricanes kept a tight grip on the proceedings.

But when they replied, the hosts also looked out of their element. Opener Montcin Hodge (three) inside-edged a delivery from medium pacer Green onto his leg stump, before West Indies Test opening batsman Kieran Powell (13) wafted at a short ball from Jacobs and nicked a catch to Walton behind the stumps.

The leg-spinner Jacobs, unleashing his full repertoire of tricks then accounted for Devon Thomas (two) and Akeem Saunders (three) in quick succession. Both were tricked in similar fashion by deliveries that skidded on straight and trapped them leg before wicket.

B King b Berridge 20

A Saunders lbw b Jacobs 3