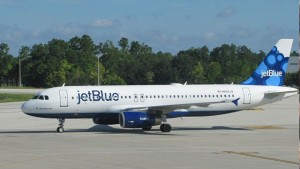 A passenger on board a Jet Blue flight gave a scare to a number of Antiguans and Barbudans and other travelers when he became unruly and violent on the aircraft en route to New York.

One passenger told OBSERVER media the man ripped a few seats on the flight and tried unsuccessfully to pry open the emergency exit in midair.

The traveler said six other passengers rushed from their seats to prevent the man from opening the exit. They wrestled with him and subdued him while the flight diverted to Bermuda where he was removed from the flight.

A JetBlue spokesperson confirmed the 740 flight diverted due to an unruly passenger, according to Bernews in Bermuda.

The news agency quotes the airline as saying, “On Aug. 24, flight 740 from Antigua to New York JFK diverted to Bermuda due to an unruly customer. Local law enforcement met the aircraft to remove the customer, and the flight then continued on to New York.”

The aircraft left the LF Wade International Airport around 8 p.m., not long after the passenger was taken away.

In addition to the police, the Emergency Medical Technicians and Bermuda Fire and Rescue personnel attended the scene.

No one was injured on the flight but an Antiguan passenger said he was scared during the ordeal as he highlighted that not only was his life at risk, but there were dozens of other passengers on board.

He said he had no idea what to think when the incident began to unfold but later passengers said they believed the unruly traveler was struggling with mental issues.