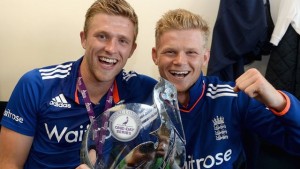 England’s 3-2 one-day series win over New Zealand can set the tone for an exciting Ashes summer, according to batsman Sam Billings.

After a disastrous World Cup, England won their five-game series against the Black Caps and close the tour with a Twenty20 at Old Trafford on Tuesday.

The five-Test Ashes series against Australia in England starts on 8 July.

“Hopefully the vibe can be taken forward into the Ashes and the one-day series,” said Billings, 24.

“It is a great start but only a start,” he added.

England set a number of records during the series win and particularly impressed with the bat – scoring their highest-ever ODI in one game (408-9) and recording their best run-chase (350-3) in another.
Ashes Tests

Kent’s Billings, who was in his maiden one-day series for England, said: “It has been a phenomenal experience and one that I will remember for the rest of my life. It is a childhood dream and it’s what you get up every day for. It has been fun, a great two weeks.

“Hopefully it has generated a bit of interest around the country and got people behind the England cricket team going into the Ashes, which can only be a good thing.

Meanwhile, New Zealand batsman Martin Guptill is hoping to end a memorable tour of England on a high on Tuesday.
Swann’s impressions

Have you heard Graeme Swann doing impressions of Jos Buttler and Joe Root? If not, click here.

“The cricket both teams have played has been about excitement and confidence so I don’t see there being any change on Tuesday night,” he said.

“It’s been a pretty amazing one-day series and unfortunately we came out on the wrong side but the guys are still pretty confident and we’ll be up for the game.”