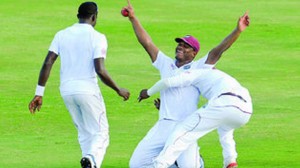 A century from Shiv Chanderpaul, Sulieman Benn’s five-wicket haul and three wickets from Jerome Taylor helped, as West Indies ran rings around Bangladesh to win by 296 runs in the second Test and claim a two-nil series win, yesterday.

Chasing an insurmountable 488 to win, Bangladesh collapsed from 158 for three to 188 all-out in the final session of the fourth day of the scheduled five-day match as West Indies produced another command performance.

Tamim Iqbal and Mominul Haque staged an amazing fight back for the tourists by adding 110 runs for the third wicket after coming together at 48 for two. In only their second hundred partnership of the series opener Iqbal played patiently to reach a top score of 64 while Haque contributed 56.

But when Benn broke the partnership by removing Iqbal the rampaging Caribbean boys pressed home the advantage to seal a lopsided victory in the 500th Test of their history. Bangladesh enjoyed a laborious but productive second session without losing a wicket as Iqbal and Haque frustrated the hosts.

Tamim’s departure, caught in the deep by Shannon Gabriel off Benn, signaled the start of a dramatic collapse. Bangladesh conceded their last eight wickets for 34 runs, including losing four wickets for nine runs, as the lower order failed to produce any fight. They were wiped out by Benn who claimed five wickets for 72 runs while Taylor, who claimed three wickets, also completed his 100 wickets for the West Indies in the format.

Earlier West Indies, 208 for four overnight, declared on 269 for four, allowing Chanderpaul to register his 30th Test century and to keep the home side in control of the game in the process. The evergreen 40-year-old Chanderpaul’s unbeaten 101, together with 66 not out from Jermaine Blackwood helped to further strengthen the West Indies position.

Apart from surpassing Sir Don Bradman’s 29 centuries, Chanderpaul is only the second West Indian, after former captain Clive Lloyd against Australia in 1984, to score a Test century aged 40 or more. He is also only the second batsman to remain undefeated throughout a Test series having played a minimum of three innings and scored 200-plus runs. Jacques Kallis was the first to do so, against Zimbabwe in 2001.