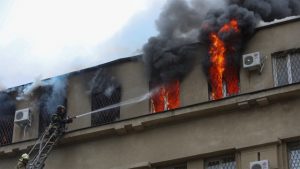 LONDON (Reuters) – Commentators on Russian state television have been forced to go off script by Ukrainian forces’ swift advance in the country’s Kharkiv region and Moscow’s rapid retreat.

Since the beginning of what Russia calls its “special military operation”, belligerent guests on state television talk shows typically have tried to outdo each other in backing President Vladimir Putin and denouncing Ukraine and its allies.

But in the wake of Kyiv’s lightning counteroffensive, the mood was more subdued and the narrative turned to how allegedly Ukrainian forces overwhelmingly outnumbered the Russians in the northeast.

The Rossiya-24 news channel on Monday interviewed Vitaly Ganchev, a Russian-appointed official in the Kharkiv region, who said that Russian troops in the province had been outnumbered “eight times over.” He also said, without providing evidence, that Ukrainian forces had been bolstered by “Western mercenaries”.

“A most difficult week on the front,” presenter Dmitry Kiselyov said at the opening of his prime time Sunday night program.

In a rare show of dissent, Boris Nadezhdin, a former liberal politician and regular talk show guest said on the Gazprom-owned NTV channel, that Putin had been misled by advisers into thinking that Ukraine would quickly surrender, and urged immediate peace talks to end the conflict.

Other hosts went for a positive spin.

Several guests also brought up Putin’s remarks from July that Russia “had not yet started anything in earnest”, saying Moscow would now intensify military action.

Newspaper coverage of the Russian withdrawal was framed by the defence ministry’s talk of a “tactical redeployment” of its troops, though some papers cited military experts suggesting that not everything had gone to plan.

The Izvestia paper, in its weekend roundup said Russia had killed 4,000 Ukrainian soldiers and the military had “redeployed forces to focus on the Donbas.”

Nezavisimaya Gazeta was more critical, saying that Russia’s defence ministry did not comment on “extremely disturbing reports from Ukraine … for several days.”

The paper noted that as Ukrainian forces were advancing on Russia’s western border, Moscow’s military leadership was thousands of miles away in the far east of the country, for annual war game exercises that involved 50,000 troops.