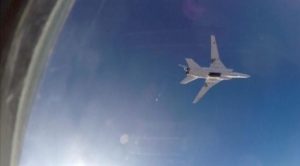 Russia used an Iranian air base to launch air strikes in Syria for a second day running on Wednesday, rejecting U.S. suggestions its co-operation with Tehran might violate a U.N. resolution.

Moscow first used Iran as a base from which to launch air strikes in Syria on Tuesday, deepening its involvement in the five-year-old Syrian civil war and angering the United States.

Washington called the move “unfortunate” and said on Tuesday it was looking into whether Russia’s move had violated U.N. Security Council resolution 2231, which prohibits the supply, sale and transfer of combat aircraft to Iran.

Russian Foreign Minister Sergei Lavrov said on Wednesday there were no grounds to suggest Russia had violated the resolution, saying it was not supplying Iran with aircraft.

“These aircraft are being used by Russia’s air force with Iran’s agreement as a part of an anti-terrorist operation at the request of Syria’s leadership,” Lavrov told a Moscow news conference, after holding talks with Murray McCully, New Zealand’s foreign minister.

Russia’s use of the Iranian air base comes amid intense fighting for the Syrian city of Aleppo, where rebels are battling Syrian government forces backed by the Russian military, and as Moscow and Washington are working towards a deal on Syria that could see them cooperate more closely.

Russia backs Syrian President Bashar al-Assad, while the United States believes the Syrian leader must step down and is supporting some rebel groups which are fighting to unseat him.