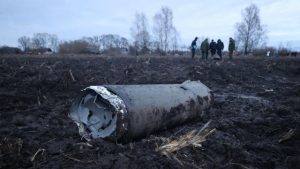 The Kremlin said on Friday it was extremely concerned about a Ukrainian anti-aircraft missile that was shot down after flying into the air space of its close ally Belarus on Thursday.

Belarus’ defence ministry said on Thursday its air defence forces had shot down a Ukrainian S-300 surface-to-air missile near the village of Harbacha in the Brest region, some 15 km (9 miles) from the Belarus-Ukraine border.

It happened while Russia was firing dozens of missiles at cities across Ukraine in one of the biggest waves of strikes of the conflict.

“This is an incident that causes extreme concern, not only for us, but for our Belarusian partners,” Kremlin spokesman Dmitry Peskov told reporters on Friday in Moscow’s first public comment on the incident, which occurred around 10 a.m. (0700 GMT) on Thursday.

The S-300 is a Soviet-era air defence system used by both Russia and Ukraine. In November, an S-300 believed to have strayed after being fired by Ukrainian air defences – also during Russian air raids – landed on the territory of NATO-member Poland, triggering fears of an escalation that were rapidly defused.

Belarus allowed Moscow to use its territory in February as a staging post for Russian troops and equipment at the start of what Russia calls its “special military operation” in Ukraine.

There has also been a growing flurry of Russian and Belarusian military activity in Belarus in recent months.

Peskov on Friday stressed the close military ties between the two countries, saying they were in “constant dialogue and constant coordination”.

Minsk has, however, insisted that it is not participating in the conflict in Ukraine, and will not participate unless its own security is threatened by Ukraine or Ukraine’s Western allies.