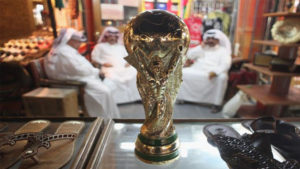 Russia has been banned from all major sporting events for the next four years, including the Tokyo 2020 Olympics and the 2022 FIFA World Cup in Qatar.

The World Anti-Doping Agency [WADA]’s 12-member executive committee came to a unanimous decision in a meeting in Lausanne, Switzerland following accusations that it had falsified laboratory doping data.

The Russian flag and national anthem are banned, though Russian athletes who can prove that they are clean will be able to compete under a neutral flag, as they did at the 2018 Winter Olympics in PyeongChang.

In response Rusada [Russia’s Anti-Doping Agency] chief Yury Ganus told AFP that his country had “no chance” of winning an appeal against the ban and called it a “tragedy” for clean athletes.

The decision comes after Rusada was declared to be non-compliant for allegedly tampering with data it handed over to investigators back in January 2019.

“Russia was afforded every opportunity to get its house in order and rejoin the global anti-doping community for the good of its athletes and of the integrity of sport, but it chose instead to continue in its stance of deception and denial,” he said.

Despite the ban, Russia will still be able to compete at Euro 2020 in its host city of St Petersburg.

UEFA, the European football’s governing body, is not technically defined as a “major event organisation” and therefore anti-doping rulings in this case do not apply.

Wada commissioned lawyer Richard McLaren to write a report into allegations of state-sponsored doping in Russia back in 2015.

Dubbed the “McLaren Report”, it contained research into doping in Russian track and field athletes.

A report published a year later in 2016 found Russia had engaged in state-sponsored doping across the “vast majority” of summer and winter Olympic sports.

The New York Times also published damning testimony by Grigory Rodchenkov, the former director of the anti-doping laboratory in Moscow, where he claimed he switched out dirty samples for clean ones in 2014.

In 2017 Russia was banned from the Winter Olympics in PyongChang, however it allowed 168 athletes to complete as “Olympic Athletes from Russia”.

Four days before the track world championships took place in Doha back in September, Wada declared it found signs that lab data handed over by Russia in January had been tampered with, and shortly after the four-year ban was put in place.