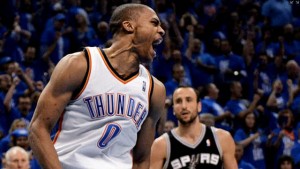 Russell Westbrook lets out a scream after scoring ahead of the Spurs’ Manu Ginobili (r.) as the Thunder win Game 3.

SAN ANTONIO — This was San Antonio at a very high level. For coach Gregg Popovich, it was more evidence that the Spurs need to be more consistent.

Tony Parker had 21 points and six assists, and San Antonio stopped Oklahoma City’s four-game winning streak with a runaway 130-91 victory over the Thunder on Wednesday night.

Boris Diaw scored 19 points and Tim Duncan had 16 for San Antonio (44-26), which has won 11 of 13. Kawhi Leonard finished with 14 points in the Spurs’ highest scoring game of the season.

“I think in general we played the way that we have to play to win a basketball game,” Popovich said. “That consistency is what we are looking for and we have not gained that yet. We see that nights like this, or in Atlanta, where we played the way we need to play and hope to play, we are a pretty good basketball team. We just have not been consistent.”

Thunder star Russell Westbrook was held to 16 points on 5-for-16 shooting. He left midway through the third quarter with the Spurs leading by 30.

Westbrook averaged 32.7 points, 11.2 assists and 9.6 rebounds in his previous 13 games, but the Spurs sent numerous defenders at the MVP candidate to hold him in check.

“They just played harder than us,” Westbrook said. “We just wasn’t ready to play. Simple as that.

“They just wanted it more. They played with a sense of urgency and we didn’t.”

Westbrook removed a mask he wears after surgery on a fractured cheekbone, rubbing the side of his face and flexing his jaw after taking a blow to the head in a collision with Manu Ginobili in the first quarter. Westbrook later pushed Duncan’s hand aside in frustration when the Spurs forward attempted to catch the point guard as he sailed through the lane after being pushed from behind by Danny Green.

“I just tried to stay in front of him, obviously,” Parker said. “I know he likes to go left, so just try to make him do other stuff. I had get help from my teammates, too, because I’m not going to stop him by myself. I had some great help.”

Westbrook and Parker pushed the ball on almost every possession early on, setting a torrid pace.

San Antonio stretched its lead to 44 points in snapping a six-game skid during the regular season to Oklahoma City. The Spurs scored 71 points in the first half, the most the Thunder have allowed in any half.

“It was a tough night on both ends of the floor,” Oklahoma City coach Scott Brooks said. “We have to get better. We have to regroup and bounce back. This is definitely not a night to remember, but it is one to get better from and we will.”

The Thunder (41-30) had four turnovers in the first six minutes, resulting in 10 of the Spurs’ first 14 points.

“I’m still mad from last night,” Parker said. “It’s so weird to play a great first quarter and then suddenly it just goes away. Then we come in tonight and we play great, so this is going to be the challenge this year, to try and find some consistency. If we want to do anything, we’re going to have to play good on the road and put games together, just play for five, 10 games in a row.”

Enes Kanter had 16 points and 10 rebounds for the Thunder, who shot 40 percent from the field, compared to 58 percent for the Spurs.

Thunder: Westbrook received thunderous boos when he was announced in the starting lineup. … Oklahoma City has missed a combined 189 games this season due to injuries or illness, compared to 133 for San Antonio.

Spurs: San Antonio’s 71 points in the first half was a point shy of tying its season high for the opening half, which it set Dec. 22 against the Clippers. … Parker held his left hand in pain after Dion Waiters slapped down on it while defending him on an attempted layup with 9 minutes left in the third quarter. After returning from a timeout, Parker showed no lingering effects from the blow.

Thunder center Steven Adams, who returned earlier this month after missing 11 games with a fractured right hand, injured his right elbow after landing on his arm while getting tangled with Duncan in the third quarter. Adams left the game shortly after falling and did not return.

Brooks said they will know more about Adams’ status tomorrow.

Duncan displayed three fingers while running down the court after making a 3-pointer with 6:33 left in the third quarter. The celebration, albeit minor, was a bit out of character for the stoic forward, but it was his second 3-pointer of the season in seven attempts.

“No, we did not call that,” Popovich said. “That just happened.”

“Defensive issues carrying over? I’m confused, you didn’t say that when we won four games in a row,” Westbrook responded to a reporter. “I’m just a little confused.”

Oklahoma City has allowed 100-plus points in five of its last six games, including 106.3 points during its recent win streak.