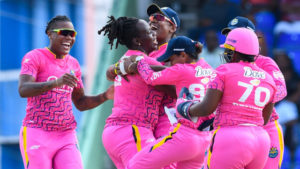 Shakera Selman took three wickets in as over as the Barbados Royals won the inaugural Women’s 6IXTY title on Sunday at Warner Park, St Kitts.

Sent in to bat, Royals openers Aaliyah Alleyne (23) and Hayley Matthews (15) put on a partnership of 41.

However, the Knight Riders came back into the game after Deandra Dottin dismissed the Royals captain, Matthews.

Anisa Mohammed (2/11) had Chloe Tryon (0) stumped and then bowled Alleyne through the gate.

Quiana Joseph had Lee-Ann Kirby (4) caught behind before getting Dottin to play on for 7.

When Afy Fletcher (1/6) claimed the wicket of Natasha McLean (3), the Royals sensed the title was theirs.

Selman was called up to bowl the ninth over, and her accurate bowling turned the tide irretrievably towards the Royals.

After a 26-run partnership, Selman had Hayley Jensen (7) holing out on the boundary first ball of the ninth over.

She had Luus (17) caught two balls later and then dismissed Kycia Knight (2) off the last ball of her over to trigger off wild celebrations among the Royals players and staff.

Selman ended with 3 for 10 off her two overs to bowl the Barbados Royals to the inaugural Women’s 6IXTY title.

Hayley Matthews was named Player of the Series after scoring 63 runs and taking three wickets.