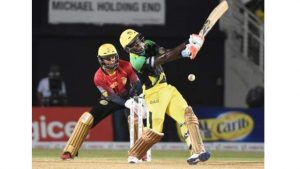 Jamaica Tallawahs batsman Rovman Powell attempts a big hit during a knock of 30 in their CPL contest against Trinbago Knight Riders at Sabina Park on Saturday.

A lot was expected of young Jamaica Tallawahs star Rovman Powell coming into this year’s fifth staging of the Hero Caribbean Premier League (CPL) Twenty20 tournament, but he is yet to deliver.

Powell has been found wanting and his performances is cause for concern, especially given the fact that the Tallawahs team is not as good as it was when claiming their second title last season.

In eight games so far this season, the all-rounder, who is heavily compared to the electrifying Andre Russell, has only contributed a mere 114 runs at a strike rate of 120.00 with an average of 14.25.

He produced a more compact performance in 13 games on CPL debut last year, accumulating 228 runs at a strike rate of 119.37, with his highest score being 44.

“To be honest, I haven’t really got going, but I’m still confident and upbeat about the team’s performance, because it’s a team sport and I know as time goes by I will contribute my bit. I have been hitting the ball well, it is just that the big score hasn’t come as yet,” Powell admitted in an interview with the Jamaica Observer.

“As a player, when you work extremely hard you always want to perform well, so when you don’t perform you are a little bit disappointed. But I am still content knowing that I still have a few games to redeem myself, so I am hoping I can get off soon and contribute positively,” he added.

The 24-year-old’s highest scores of 31 and 30 this season came ironically in two high-scoring games that required his explosive hand to take the Tallawahs across the line.

Unfortunately, he was unable to provide that boost in a 37-run loss to St Kitts and Nevis Patriots at Warner Park, and again in a 36-run defeat to Trinbago Knight Riders at Sabina Park on Saturday. Both teams had set the Tallawahs 208 for victory.

The right-hand batsman is now eyeing significant improvements in the Tallawahs last two games at home in the preliminary round to assist his team into the play-offs, and by extension the final to defend their title.

“I would look at those scores as a glimpse of what is to come. I think I am hitting the ball well and on both occasions I tried to win the game, but I tried too late and unfortunately we came out on the losing end,” Powell noted.

The two-time champions, who are currently in third on 10 points, will next face the Chris Gayle-captained Patriots tomorrow and close against the Guyana Amazon Warriors on Friday.

“It is always exciting to play in front of my home crowd. recently I have been getting some international experience playing in front them and last year I played in front them as well. So it is definitely a good look so far, but it is just to improve some more,” Powell conceded.

“I am hoping we can get into the play-offs and by extension defend our title. The players are still upbeat and together although we have lost a few games, but we remain confident because we are in a very good place and I am hoping we continue to play as a unit,” he added.

Bowling his medium pace, Powell has shown much improvement with the ball, so far grabbing five wickets, a few of which came at crucial intervals in a game.

“I am hoping the big scores will come soon because I want to finish with a certain amount of runs, so I definitely need to start getting the runs on the board now. But in terms of bowling, I am not exactly where I want to be with the ball, but the work continues and hopefully I can come up big for the Tallawahs,” Powell ended.