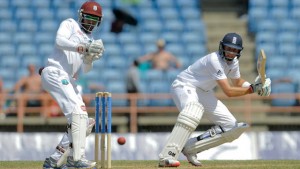 The plucky right-hander, playing in his 24thTest, delighted himself on a flat track at the Grenada National Stadium and in the best batting conditions of the game to finish the day 118 not out, steering England to 373 for five at the close.

He was joined by fellow rookie Gary Ballance who struck 77, captain Alistair Cook who stroked 76 and Jonathan Trott who made 59.

England were cruising at one point on 329 for three in the final session but West Indies stuck to their task and clawed their way back, grabbing three wickets for 35 runs to end the day strongly.

The vistors lead by 74 runs heading into Friday’s fourth day.

With little help from a lifeless track, fast bowler Shannon Gabriel managed to pick up two for 60 while leg-spinner Devendra Bishoo, in his first Test in three years, sent down a marathon 41 overs and finished with two for 124.

Resuming the day on 74 without loss in pursuit of West Indies’ 299, England were given a great start by openers Cook and Trott, who stretched their overnight stand to 125 before being separated.

The left-handed Cook struck eight fours in an innings lasting 211 balls and just over 4-1/4 hours while Trott’s knock spanned 147 deliveries and 3-1/2 hours, and included seven boundaries.

Both were ultra-cautious at the start, with just 28 runs coming from the 16 overs sent down in the first hour. In fact, Trott got the only boundary during that time – an outside edge past gully off Gabriel – as England climbed to 102 without further loss.

Cook was first to his century and Trott followed in the fourth over after drinks but fell soon after when he was drawn into a drive by Bishoo and nicked a leg-break to Jermaine Blackwood at a close-in gully, with the score on 125.

Cook had his share of luck when he reached 65 in the fifth over before lunch. He missed one from Bishoo as he pushed forward, and had an appeal for lbw turned down.

West Indies reviewed and Cook escaped narrowly after replays showed the ball pitching in line but clipping the top of the stumps.

He was 67 at lunch partnered by Ballance on ten, with England on 143 for one, but Gabriel struck two key blows after the break to haul West Indies back into the contest.

Cook had added a further nine runs before he perished in the fifth over after the break, dragging on attempting to cut an innocuous delivery from Gabriel.

The barrel chested pacer then struck again with the first ball of his next over, claiming Ian Bell for one, the right-hander also dragging on as he looked to play a short ball square of the wicket.

Whatever hopes West Indies had of making further inroads were quickly quelled as Root and Ballance combined in a superb 165-run, fourth wicket partnership to win the session for England.

Root gathered his runs busily and has so far counted 13 fours and two sixes in a knock that has consumed just 165 balls while Ballance struck eight fours and a six in an innings spanning 188 balls and four hours.

The Windies bowlers were guilty of losing the plot somewhat and Root and Ballance cashed in. Root cruised to his half-century – his third of the series – in the second last over before tea and the left-handed Ballance followed in the second over afterward, when he drove a Gabriel full toss to the cover boundary.

Between them, they plundered 16 runs from a Bishoo over and seemed in complete command when the tide turned slightly.

Part-time off-spinner Marlon Samuels was recalled for another spell and he struck with his fifth delivery when Ballance inside-edged a booming drive onto his leg stump, in the fourth over after the drinks break.

Thirteen deliveries later, Moeen Ali was run out without scoring. He attempted a non-existent sharp single but was sent back by Root and failed to beat Jermaine Blackwood’s throw to wicketkeeper Denesh Ramdin.

And West Indies completed a rewarding session when Ben Stokes gifted his wicket, failing to clear the ropes at mid-wicket and being taken in the deep by Blackwood for eight.