Rihanna’s Uncle Charged With Selling Knock-offs of Her Brand 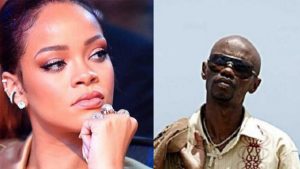 Rihanna exposed the sale of her knock-off brands, which led to her uncle, Leroy Brathwaite (right) being charged.

Not even family gets a pass when it comes to Rihanna clamping down on people trying to sell knock-offs of her popular clothing and shoe brands.

Her uncle, Leroy Fitzgerald Brathwaite, was hauled before the courts in Barbados yesterday for selling fake Fenty x PUMA slippers and t-shirts. The vendor allegedly committed the offences back in May this year.

A PUMA representative from Curacao, Luis Leon Herman Convalis, attended the court hearing as Brathwaite faced charges under the Consumer Protection Act. And according to the Nation newspaper, it was Rihanna who blew the whistle.

It was reported that while the superstar was in homeland earlier this year, she noticed the knock-offs of her PUMA brand being sold in the capital, Bridgetown, and reported the matter to her PUMA representative who flew into the island to see for himself. He then filed a report with police and an investigation was carried out, which led to Rihanna’s 53-year-old uncle being charged.

When Brathwaite appeared in court, he pleaded not guilty to the charges of: falsely representing that 11 pairs of slippers and 13 T-shirts were authentic PUMA items; exposing the goods for sale, intending to benefit from their sale; and exposing the items for sale without the consent of the owner of the PUMA trademark.

However, Brathwaite’s attorney Sian Lange argued that the charges should be dismissed because they were “improperly” laid. The defence lawyer contended that no prohibition or warning notice was served on her client by the Fair Trading Commission (FTC), as provided for under the Consumer Protection Act.

The legislation outlines procedures that include serving a notice prohibiting a person from supplying or from offering to supply, agreeing to supply, exposing for supply or possessing for supply, any relevant goods which the FTC considers are unsafe. It also states that the FTC may serve on any person, a warning notice requiring that person, at his own expense, to publish in a form and manner on occasions specified in the notice, a warning about relevant goods which the Commission considers are unsafe, which that person supplies or has supplied.

Magistrate Kristie Cuffy-Sargeant, who presided over the case, adjourned the matter until next Tuesday, at which time the prosecution is expected to respond to the defence attorney’s submissions.