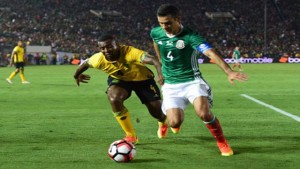 PASADENA, California — Jamaica crashed out of the Copa America Centenario tournament after going down 0-2 to Mexico inside the Rose Bow Stadium in front of 83,263 spectators. Javier ‘Chicharito’ Hernandez gave the Mexicans the lead on 18 minutes before substitute Oribe Peralto made the game safe nine minutes from time, and just three minutes after replacing Hernandez.

In-between the Jamaicans proved extremely wasteful, creating numerous chances, but failing miserably to put them away, and at times even testing goalkeeper Guillermo Ochoa. The defeat left Jamaica stuck one place from bottom in the four-team group on zero points after also losing 0-1 to Venezuela on Sunday.

Mexico lead the group on goal difference over Venezuela on six points, with both teams qualifying for the quarter-finals. The Venezuelans had earlier edged Uruguay 1-0 through a 36th minutes goal from Salomon Rondon.

The Jamaicans will now wrap up their campaign next Monday at Levi’s Stadium in Santa Clara, California, against Uruguay, who have also been eliminated.