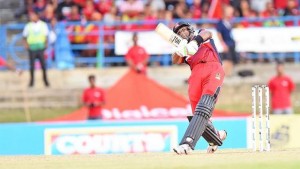 But the leg spinner and his Trinidad and Tobago Red Steel won a crucial contest against the Jamaica Tallawahs at Queen’s Park Oval to make sure of a playoff place in the Hero Caribbean Premier League yesterday.

Badree, coming back with three wickets later in the innings after conceding 26 in his first, combined with captain Dwayne Bravo (4-0-18-2) to give his team victory by seven runs.

Defending the 142 they made off their 20 overs, the Red Steel survived that one-over Gayle onslaught and Andre Russell’s threatening 36 off 22 balls to push themselves into second place in the standings on 11 points, one behind the Barbados Tridents. And Bravo’s men can claim an automatic qualifying spot if they can win their fourth straight match, against Guyana Amazon Warriors in Guyana tomorrow.

Bravo removed Gayle in his first over, the third of the innings, which in addition to his unbeaten 49, was enough to beat Jacques Kallis and Badree to the Man-of-the-Match award.

The three sixes and two fours that Gayle plundered off the first five balls of the Tallawahs run chase took the breath away from a packed Oval. But the Tallawahs once again were unable to respond once their captain went early.

The Red Steel effort with the bat was all about Jacques Kallis’ anchoring 61 off 51 balls and Dwayne Bravo’s late innings flurry.

The Tallawahs quintet of Rusty Theron, Daniel Vettori, Jerome Taylor, Krishmar Santokie and Andre Russell kept the Red Steel batsmen and the crowd shackled for most of the innings with their good lengths and varied pace of deliveries.

After the opening stand of 34 between Kallis and William Perkins yielded four fours and a six—all to Kallis–the boundaries dried up.

First, Perkins (five) was adjudged lbw to Jerome Taylor by umpire Peter Nero to a full delivery that have been heading past leg stump. Then No.3 Kamran Akmal (14 off 21) and Darren Bravo (five) never got going, the former running himself out in the 12th over (66-2) and the latter miscuing an indifferent lofted shot off Russell to long-off.

Between the fourth and 14th overs, just two boundaries came, until the skipper came to wake crowd up. Chancing his arm and being dropped off a steepler by Gayle, Dwayne B gave the innings desperately needed momentum, launching sixes to long-off, long-on and midwicket in his rapid-fire 49 off 30 (two fours, three sixes). In tandem with Kallis he gathered 69 off the last seven overs.

The South African veteran batted through the entire innings, his placement and authentic strokeplay keeping him scoring always better than a run a ball. He kept the Red Steel in the match. And the injury he picked up early in the Tallawahs run chase will be a cause for concern to his team.

They will need the Kallis calm at the business end of their season.