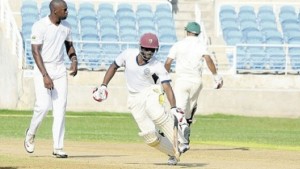 Left-arm spinner Kavesh Kantasingh grabbed a four-wicket haul and leg-spinner Imran Khan another as Hurricanes collapsed to 118 all out in their first innings after resuming the day on 55 for four.

Forcing the hosts to follow on by 207 runs, Red Force were again incisive, sending them tumbling for 184 in their second innings to complete a comprehensive win at Warner Park.

Kantasingh, returning to first class cricket for the first time in two years, picked up another two wickets in the second innings to finish with a six-wicket haul and claim Man-of-the-Match honours.

Off-spinner Narsingh Deonarine was the best bowler with three for 32 while Imran Khan was among the wickets with two for 41.

Resuming the day needing a special batting effort to get out of trouble, Hurricanes failed to find a saviour despite Jamaican Nkrumah Bonner’s top score of 57 not out.

Starting the day on 27, the right-hander provided the only resistance for Hurricanes, striking four fours off 96 deliveries in two-and-half hours at the crease.

He was one of only three batsman in double figures and the only to pass 15.

Bonner put on 23 for the fifth wicket with Orlando Peters (seven) but once the latter departed, Hurricanes lost their last five wickets for 40 runs.

In their second turn at the crease, Hurricanes put up a little more fight with tail-ender Gavin Tonge producing a cavalier 41 from 40 balls at the end with the game already decided and opener Shane Jeffers chipping in with 36.

Daron Cruickshank struck 26, Bonner got 24, and Captain Steve Liburd, 20, all getting starts but failing to carry on.

Hurricanes lost Sherwyn Peters without a run on the board, nicking a catch behind off fast bowler Shannon Gabriel but Jeffers and Cruickshank stabilised the innings in a 48-run, second wicket partnership.

When Cruickshank swept Imran Khan into the lap of Deonarine at backward square, six wickets tumbled for 79 runs to leave Hurricanes tottering on 127 for seven.

Tonge then entertained, throwing caution to wind in an 18-ball cameo that included four fours and three sixes, as he added 42 for the eighth wicket with Alzarri Joseph (14).

Tonge’s demise, caught at long-off off Deonarine, signalled the end for Hurricanes.