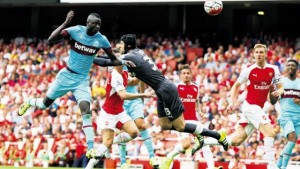 LONDON, United Kingdom (AFP) — Petr Cech made a Premier League debut to forget for Arsenal as his errors helped West Ham United to record a 2-0 victory at the Emirates Stadium yesterday.

Cech’s arrival from Chelsea has been acclaimed as a signing that could turn Arsenal into title contenders, but he was found wanting as Arsene Wenger’s side opened their Premier League campaign with a home defeat for the second time in three years.

Cech’s rash charge allowed Cheikhou Kouyate to head West Ham in front from debutant Dimitri Payet’s 43rd-minute free kick and the Czech international’s slowness to get down saw him beaten at his near post from 25 yards by Mauro Zarate shortly before the hour.

“We were not convincing offensively or defensively,” said Wenger, whose side beat champions Chelsea 1-0 in the Community Shield last weekend.

“The players were maybe too nervous and put too much pressure on themselves. Today we have been hurt mentally and it is a good opportunity to respond.”

West Ham’s win echoed Aston Villa’s 3-1 success at the Emirates on the first day of the 2013-14 campaign and enabled Slaven Bilic to crown his first league game as manager with a famous victory.

“We are all very pleased and it is a great start for us — not only for the three points, but points against a team that are title contenders,” said the Croatian, who is a former West Ham defender.

“If you add to that a London derby, it makes it an even bigger win. This is very special. I am very proud of the second-half performance.”

Bilic named 16-year-old Reece Oxford in midfield and saw the teenager turn in a commanding display as West Ham bounced back from their Europa League elimination at the hands of Romanians Astra Giurgiu last Thursday.

Wenger sent on Theo Walcott and Alexis Sanchez as Arsenal sought to claw back their two-goal deficit, but the closest they came to scoring was a deflected first-half shot by Aaron Ramsey that hit the bar.

Philippe Coutinho scored a stunning 30-yard winner in the 86th minute as Liverpool partially atoned for their 6-1 drubbing at Stoke City on the final day of last season with a 1-0 win at the Britannia Stadium.

But the game was drifting to a goalless draw until Brazilian playmaker Coutinho picked the ball up in the inside-left channel, turned, and arrowed a glorious, bending strike into the top-right corner.

Rodgers admitted afterwards that he had been contemplating taking Coutinho off before the Brazil international struck.

“He did a wonderful spin to get away from Steve Sidwell and then got the shot off to beat Jack Butland, who is an excellent ‘keeper,” Rodgers told Sky Sports.

“It was a wonderful goal to cap a really good performance.”

After Graziano Pelle had given the visitors the lead, goals from Papiss Cisse and £14.5 million new recruit Wijnaldum put Newcastle in front, but Southampton substitute Shane Long headed in a 79th-minute equaliser.

Chelsea opened their title defence with a 2-2 draw at home to Swansea City on Saturday, with Manchester United edging Tottenham Hotspur 1-0.