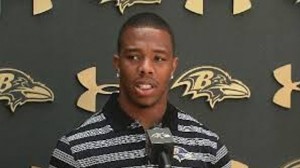 (CNN) — Running back Ray Rice was released by the Baltimore Ravens and suspended indefinitely by the NFL on Monday, the same day a shocking video surfaced showing the NFL star knocking out his future wife with a punch in February.

The news release from the Ravens was terse.

“The Baltimore Ravens terminated the contract of RB Ray Rice this afternoon,” it read.

Baltimore Ravens coach John Harbaugh told reporters Monday night that the team had not seen the video before it was released online by TMZ.

“It was something we saw for the first time today, all of us. It changed things, of course. It made things a little bit different,” he said.

Harbaugh said he and Ravens general manager Ozzie Newsome called Rice to inform him of the decision. He declined to discuss what Rice said or how he reacted.

“I have nothing but hope and goodwill for Ray and Janay (now his wife),” Harbaugh added. “And we’ll do whatever we can going forward to help them as they go forward and try to make the best of it.”

Shortly after the team’s announcement, the league said the three-time Pro Bowl selection was suspended indefinitely.

NFL Commissioner Roger Goodell, who had originally given Rice a two-game ban, increased the suspension after viewing the new video for the first time, NFL spokesman Greg Aiello said on Twitter.

Former teammate and ESPN analyst Ray Lewis said he had texted with Rice on Monday.

Lewis, who played with the Ravens from 1996 to 2012, said on “Monday Night Countdown” that he will meet with Rice soon to counsel and mentor him.

“I want to sit down and I want to know what is going on in his heart,” said Lewis.

In a press conference in July, Rice said his actions were “inexcusable” and that he and his wife were in counseling. The couple married on March 28.

Before Rice, 27, can play again in the NFL, any potential contract cannot be approved without further direction from the commissioner, Aiello told CNN.

The Canadian Football League said Monday night Rice is ineligible to play in the CFL while he is suspended by the NFL.

Video shows what happened inside elevator

The new video shows Rice punching Janay Palmer, who was his fiancee at the time, inside an elevator at a hotel in Atlantic City, New Jersey, seven months ago.

TMZ Sports posted the video Monday showing Rice and Palmer entering an elevator. Inside the elevator, Rice punches Palmer. Palmer lunges after Rice, and then Rice hits her again and she falls to the floor.

Previously, TMZ Sports had released hotel surveillance video of Rice dragging an unconscious Palmer out of the elevator. This is the first time video has been released that shows Rice punching her.

A few months after the incident, NFL Commissioner Roger Goodell suspended Rice without pay and fined him an additional game check for “conduct detrimental to the NFL.”

However, no one in the NFL offices, including Goodell, had seen the newly released footage of the incident until Monday, the league told CNN.

Ray Rice: ‘My actions were inexcusable’

“We requested from law enforcement any and all information about the incident, including the video from inside the elevator,” NFL senior vice president of communications Greg Aiello said. “That video was not made available to us and no one in our office has seen it until today.”

The NFL has previously said that Rice entered a pretrial intervention program in May. Under the program, he won’t be prosecuted, and the felony charge — one count of third-degree aggravated assault — will be expunged after one year.

Jeffrey Toobin, a senior legal analyst for CNN, said Rice’s punishment was of the kind that teenagers get when they are caught spray painting graffiti.

“It is a tiny, tiny penalty that is an absolute disgrace,” he said. “The D.A. (office) embarrassed the country, embarrassed themselves. And Roger Goodell did an appalling job then for the NFL. But … law enforcement was horrendous here.”

Goodell admitted punishment was too lenient

Goodell has already been scrutinized for suspending Rice for just two games, months after the first video aired. Many felt the suspension wasn’t enough, and in August, the commissioner himself agreed.

In a letter to all NFL team owners, he said the league had fallen short of its goals in its handling of the Rice case: “We allowed our standards to fall below where they should be and lost an important opportunity to emphasize our strong stance on a critical issue and the effective programs we have in place.”

“I didn’t get it right. Simply put, we have to do better. And we will,” he added.

Some NFL fans have questioned why Harbaugh would call Rice “one heck of a guy” after the news broke and why the Ravens would tweet out in May “Janay Rice says she deeply regrets the role that she played the night of the incident.”

They have also questioned why Cleveland Browns receiver Josh Gordon would be suspended for a year after testing positive for marijuana when Rice was suspended for just two games.

In his August letter to team owners, Goodell said the league will institute a six-game unpaid suspension for personnel who violate the league’s personal conduct policy when it relates to domestic violence. A second domestic violence incident would be punished by a lifetime ban from the league.