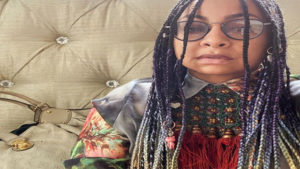 Former child actor Raven-Symoné has accomplished much more than a successful transition into an adult thespian. She is a boss.

The 34-year-old Raven-Symoné Christina Pearman, also known mononymously as “Raven,” became a household name at just 3-years-old when she played Olivia Kendall on the seminal sitcom, “The Cosby Show,” from 1989-92.

Twenty-eight years later, Raven has yet to even touch any of the money she has saved from her Cosby years.

This astonishing fact was revealed during her Instagram live interview with social media influence Jerome Trammel.

“Is it true you haven’t touched your Cosby money or you mean residuals as of lately?” Trammel asked the star.

“I haven’t touched my Cosby money,” Raven admitted with her face and blonde and blue-box braids partially hidden behind a red hoodie and glasses.

Raven’s success story runs counter to the many horror stories involving child stars such as Gary Coleman (who played Arnold on “Different Strokes”), Macauley Caulkin (Home Alone) and Corey Feldman (The Lost Boys). They either flamed out, got strung out on drugs, sexually exploited by industry pedophiles, suffered mental breakdowns, or were robbed by their own parents of the millions they earned.

In Raven’s case, she quickly parlayed her starring role on “The Cosby Show” to a transition on “Hangin’ With Mr. Cooper” from 1993 to 1997. She also got blessed with high profile roles opposite Eddie Murphy in the blockbuster Dr. Doolittle franchise as well as The Princess Diaries 2: The Royal Engagement, “Empire,” “The View” and The Bold Type.

Raven cemented her icon status as the star of the record-breaking sitcom, “That’s So Raven” and later as executive producer and star of the spin-off series “Raven’s Home.” All of the residual money Raven has received from her subsequent work has enabled her to keep the lid on the vault securing her “Cosby Show” funds.