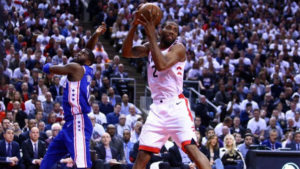 “It’s not the end of the world,” Philadelphia star Jimmy Butler told a teammate.

The Nuggets beat the Trail Blazers by 26.

Butler and Lillard are right. Their teams still have a chance.

But their lopsided setbacks last night have spelled doom for every team that previously faced a similar situation.

In what had been 2-2 series, Toronto and Denver blew the doors off their opponents in Game 5. The Raptors won, 125-89. The Nuggets won, 124-98. And just like that, a pair of tight series now have overwhelming favorites.

Game 5 winners in a 2-2 best-of-seven series have won the series 82% of the time. So, simple victories would have put Toronto and Denver in the drivers’ seats.

But the way they won suggests they’ve seized even greater control.

So, if the 76ers or Trail Blazers win their series after suffering a blowout like that last night, it’d be unprecedented.