Rain has the final say 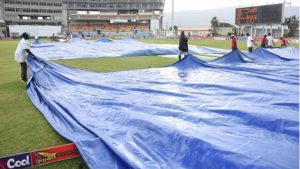 Workmen at Sabina Park yesterday trying their best to keep the ground and pitch dry.

Heavy rainfall ruined almost the entire second day of the first Test between Pakistan and hosts West Indies at Sabina Park. However, in the little time allowing, Pakistan left-arm pacer Mohammad Amir was as irrepressible as he was on Friday to emerge the biggest winner yesterday.

West Indies, resuming on 244-7, inched to 278-9 from the 11 overs and three balls that were possible in the face of torrential showers and soggy patches in the outfield.

In all that gloom, the 25-year-old Amir, who had 3-28 overnight, plucked two wickets to register his first five-wicket haul since returning to Test cricket last year after a five-year ban for spot-fixing. He ended with figures of 5-41 off 24 overs and three balls.

Jason Holder, the regional team captain, was the other bright spark, ticking off his fifth half-century in 21 Tests. Holder, also 25, was positive and assured to end the day on an unbeaten 55 off 69 deliveries. He is to resume today with last man Shannon Gabriel, who is four not out.

Play is scheduled to start 9:30 am — 30 minutes earlier than usual to make up for some of the time lost.

Yesterday, despite a fair amount of sunshine, the start of play was delayed after persistent overnight rain left wet areas on the outfield. Members of the ground staff were seen employing varying methods to aid the drying process.

There also appeared wet patches in the bowler’s run-up and on the pitch, despite the use of protective covers over those areas.

Michael Hylton, the head of the Sabina Park ground staff, yesterday confirmed to the Jamaica Observer that “there were areas on the field that weren’t ready for play based on rain the night before”.

He however declined to comment on what caused the wetness on and around the areas under cover. The Observer understands that seepage under the protective covers or a breach in it are two of the likely causes.

Pakistan had a virtual new ball — used for only one over before close of play on Friday.

West Indies had Holder, not out on 30 and Bishoo on 23. Both were troubled by the pace bowling pair of Amir and debutante Mohammad Abbas, and escaped with streaky shots.

They stretched their partnership to 75 runs — the highest eighth-wicket stand for the West Indies versus Pakistan in Tests, but it was 264-8 when Bishoo wafted at a full and wide delivery from Amir and feathered a catch to wicketkeeper Sarfraz Ahmed.

But the towering Holder held steady at the other end.

A good length delivery from Abbas was lifted over the long off boundary with the straightest of bat faces to bring up West Indies skipper’s fifty in majestic fashion. A delicate nudge down to the third man boundary a ball later showed the versatility in Holder’s batting armoury.

However, the left-armer Amir, bowling around the wicket, castled Alzarri Joseph (zero) with a full swinging delivery that beat the tail-ender’s swiping bat blade.

Soon after, a heavy downpour had the final say on a frustrating day — which saw less than one hour of cricket — for the handful of spectators at the venue.