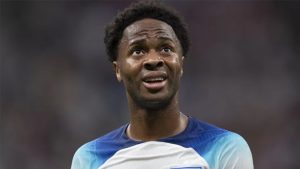 Police investigating a break-in at the home of England star Raheem Sterling have confirmed jewellery and watches were reported stolen.

The player left the England World Cup squad in Qatar after intruders broke into his home in Oxshott, Surrey.

A spokesperson for Sterling said the burglary was carried out by armed intruders while his family were home.

But later Surrey Police said no-one was at home at the time and no threats of violence were involved.

“We are aware of media reports stating there were armed suspects involved, however, at this time, we would reassure our communities that no witnesses have come forward to this effect,” a police spokesperson said.

Sterling’s spokesperson said the footballer was “shaken” by the news and that “as soon as he was alerted he wanted to get home, concerned for the well-being of his children”.

On Monday, police said in a statement: “We are currently investigating a report of a burglary at an address in Oxshott, Leatherhead.

“On Saturday, 3 December the occupants returned to the address after arriving home from an international trip.

“They contacted police just before 9pm to report a number of items of jewellery, including watches, had been stolen. Officers attended the address later that night and returned to speak to the occupants this morning.

“At this time it remains unclear on which date the property was stolen and establishing this forms a key part of our investigation.”

‘Thoughts are with him’
Manager Gareth Southgate confirmed that Sterling had left the squad after Sunday’s 3-0 last-16 win against Senegal.

England captain Harry Kane sent his best to Sterling at a press conference in Al Khor.

“Our thoughts are with him and his family,” he said.

“It is a private matter with him, but it’s never easy to see one of your teammates and friends have to deal with something like that.

“We will take it day by day and take the best decision for him and his family. From us as a team we send him our best and hope to see him as soon as possible.”

Chelsea forward Sterling, 27, started and scored in England’s 6-2 win over Iran in their opening group game before being called on again for the 0-0 draw with the United States.

Sterling is the second player to leave the England squad after Arsenal defender Ben White, who returned to the UK on 30 November for personal reasons.

Two years ago, three burglars who targeted a number of homes in the north west of England, including an attempted break-in at Sterling’s then-home in Cheshire in November 2018, were jailed.

The Football Association offered extensive security guidance to players before leaving for Qatar and has an experienced security team on hand to advise and provide support.

England’s next match at the World Cup is against France in the quarter-finals on Saturday.