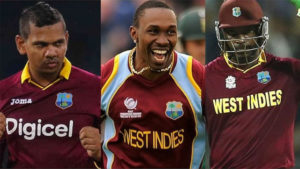 FORMER West Indies batsman Suruj Ragoonath insists that he would leave both veteran players Chris Gayle and Sunil Narine out of a squad for the T20 World Cup, but for very different reasons. With the World Cup just a few months away, the debate has raged on regarding the most effective composition of the squad. Experienced players like Gayle, Narine, and Dwayne Bravo, who all have world titles under their belts, remain eligible for selection. Some have called for the selection panel to look past the players. Recently, the selection of veteran players Fidel Edwards and Gayle, for the West Indies series against Sri Lanka, set off vigorous debate around the region. While some endorsed the Cricket West Indies (CWI) selection panel’s decision to add experience to the World Cup squad, some argued that Gayle being 41 and Edwards 39, the CWI should invest in selecting promising youth players. In the meantime, top spinner Narine is only 32 but has not appeared for West Indies since 2019 and prior to that had not played consistently.

“I don’t think that Sunil Narine is interested in going to World Cup, to be honest, given the challenges he had,” Ragoonath told the Mason and Guest radio programme.
“Dwayne Bravo is showing that he is still capable and Chris Gayle for me is a big question mark. For the first time, I’ve seen Chris Gayle actually dive around in a match. The last game they played (Punjab King’s XI) he looked a little fitter, but at the same time, I am not inclined to taking Chris Gayle to a World Cup at this stage,” he added. Gayle struggled to make an impact against Sri Lanka in March, scoring just 29 runs in three matches. Since the start of this season’s IPL, the batsman has been solid, if not spectacular for Punjab Kings XI after scoring 165 runs from seven matches.
“Of the three, I would love to have Sunil Narine on my side, but psychologically Sunil is not half the player he used to be and so Bravo is the only one I would give serious consideration to.”