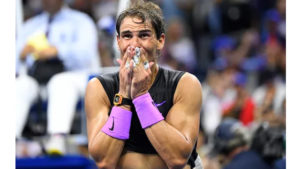 FLUSHING MEADOWS, N.Y. — In the 127th and last match of the men’s tournament at the US Open, on Sunday night, before a deafening crowd that sounded as if it were watching a bullfight, a Grand Slam legend and a Grand Slam neophyte slugged it out for more than four hours and 40 minutes in one of the great battles in the annals of major tennis.

When it was all done, Rafael Nadal had won his fourth Open title and 19th major title, prevailing 7-5, 6-3, 5-7, 4-6, 6-4, barely surviving an epic comeback from a 23-year-old Russian, Daniil Medvedev, who rallied from two sets down to push one of the greatest players in history to the limit.

“This has been one of the most emotional nights in my tennis career,” Nadal said during the trophy presentation. “It’s been a pleasure to play in front of you in this amazing stadium, so many, many thanks for everything.”

Nadal, who was overcome in his chair while watching a video montage of his 19 Slam titles, was quick to congratulate Medvedev, who he said surely would have many more opportunities to win on this stage.

“What he’s done is outrageous,” Medvedev said, before joking that had he won, he wondered what the USTA would have shown on the jumbotron.

“It’s because of your energy I was here in the final,” Medvedev said. “You guys were pushing me to prolong this match because you wanted to see more tennis and because of you guys I was fighting like hell.”

The Russian was quick to stress his comments were heartfelt, after twice playing villain to the crowd in earlier matches, egging spectators on when they booed him and flipping off a chair umpire.

Medvedev broke Nadal when he was serving for the set at 5-2 in the fifth, staving off two championship points, and had a break point to square the match at 5-5 in the 10th game, before Nadal, serenaded often with “Rafa, Rafa” chants, escaped and finally won it when Medvedev socked a forehand return long.

Making his first appearance in a final, Medvedev, the No. 5 seed who had won 12 straight matches, had a break point in the second game of the fifth, a prime chance to seize control of the match and possibly pull off the first five-set victory of his career.

Serving at 30-40, Nadal was penalized his first serve by chair umpire Ali Nili because of a clock violation, failing to serve in the allotted 25 seconds. (It was the first of three service violations called on Nadal). The crowd rained boos down on the chair, but Nadal held for deuce and went on to win the game, and three games later, Nadal belted a superb backhand crosscourt winner on an approach, breaking Medvedev to go up 3-2.

Down two sets and a break and looking as if he were on his way to the runner-up trophy, Medvedev, a first-time finalist, made a heroic charge, breaking Nadal twice in the third set, the second coming on a blistering backhand winner on set point. Medvedev, raising his level to unforeseen heights in front of a boisterous Arthur Ashe Stadium crowd of nearly 24,000, kept the pressure on in the fourth set and broke Nadal again to finish it, this time with a crackling backhand return winner.

For most of the first two hours, Nadal’s victory seemed to be almost a formality, before Medvedev, a spindly 6-foot-6, 182-pounder who was the first Russian to reach a major final since Marat Safin won the Australian Open in 2005, completely changed the story line.

Medvedev was the hottest player on tour this summer, winning more matches (50) in 2019 than any other player. His only two defeats in the last five weeks were to Nadal. It is a club with no small amount of members.