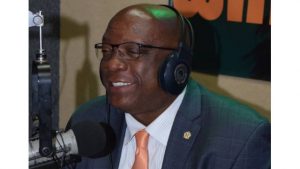 ROSEAU, Dominica (CMC) — A senior advisor to the Dominica Government yesterday warned of a possible erosion of Caribbean unity as he criticised the decision of United States President Donald Trump to meet with select regional leaders tomorrow, to discuss issues ranging from Venezuela to Chinese economic intervention in the Caribbean.

The White House in a statement that Trump, at the meeting at his Mar-a-Lago resort in Florida, will reaffirm Washington’s “strong friendship with and commitment to these countries, and signal the importance of the Caribbean to the hemisphere.

“The president will discuss his vision for our diverse relationships in the Caribbean and the potential opportunities for energy investment,” said the statement, adding that Trump and the Caribbean leaders will also discuss Chinese economic intervention in the region and the extant political and economic crisis in Venezuela.

Trump has invited the leaders of The Bahamas, Jamaica, St Lucia, Haiti, and the Dominican Republic to the meeting.

Senior Counsel Anthony Astaphan, speaking on the State-owned DBS Radio here, said that his position on Trump’s invitation to the selected prime ministers, takes into consideration the fact that the president or, for that matter, the head of government, could invite whom he or she pleases to a meeting.

“But the prime ministers from Caricom are the ones with the obligation, and the duty, and the decency to make a calculated decision on the basis of respect for the unity of Caricom, and that, in fact, the president or the prime minister of England or Canada wants to have a discussion with Caribbean countries about any matter relating to China or… in relation to Venezuela, it has to be with the representatives of Caricom and must include the chairman of Caricom”.

Astaphan said that none of the seleced prime ministers who will meet with Trump “has the authority or the jurisdiction to speak on behalf of Caricom.

“They certainly can’t speak on behalf of St Vincent, Antigua, St Kitts & Nevis, Dominica, and Grenada. They don’t have the authority,” he said, describing the upcoming talks as being “cosmetic”.

He said he believes the regional leaders, especially those from the OECS (Organisation of Eastern Caribbean States), have shown “complete disrespect for the unity of the OECS… by deciding to go to a meeting and neglecting the fact that the chairman of Caricom is not Allen Chastanet (St Lucia prime minister), but Dr Timothy Harris (the prime minister of St Kitts & Nevis).

“As I said, the president could invite who he wants, but those invited must have the moral and political courage to indicate that they cannot speak for Caricom, they are not authorised to speak for Caricom or for the OECS, and that the duly appointed representative of Caricom must also be invited…”

Astaphan said he was certain that at the last OECS summit held in Guadeloupe last weekend, “some of the prime ministers would have said that precise thing to Allen Chastanet”.

Astaphan said that the meeting could bring to the fore, a disunited Caricom, noting that even on the issue of the European Union blacklisting the region as tax havens, “some countries are acting very selfishly.

“You cannot be a lone ranger in Caribbean politics,” Astaphan warned.

In January, Jamaica, Haiti, The Bahamas, Guyana, and St Lucia supported a resolution at the Organization of American States (OAS) in not recognising Nicolas Maduro’s second five-year term, while Dominica, St Vincent and the Grenadines, and Suriname voted against the measure.

St Kitts & Nevis, Trinidad and Tobago, Antigua and Barbuda, Barbados, and Belize abstained during the vote; while Grenada was not present.

But Caribbean leaders at their inter-sessional summit in St Kitts & Nevis last month reiterated their position of non-interference in the internal affairs of Venezuela and said they were prepared to mediate in the process to bring about a peaceful resolution to the crisis where Guaidó, with the support of Washington, is seeking to replace President Maduro, who was sworn into office for a second consecutive term earlier this year.