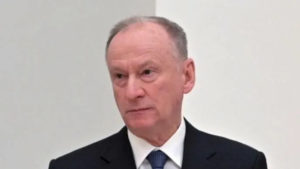 Secretary of the Russian Security Council Nikolai Patrushev said that Poland is moving to seize territories in western Ukraine.

He said this on Tuesday at a meeting on national security in the Volga region.”European Pravda” with reference to the Russian agency “Interfax”.

He said that the partners of the “Kyiv regime” are not averse to taking advantage of the current situation to further their own interests and have special plans for Ukrainian lands.

According to him, this was confirmed by the visit of Polish President Andrzej Duda to Kyiv and his words that “soon the Polish-Ukrainian border will cease to exist.”

Earlier in May, Duda proposed to conclude a new agreement on the friendship between Poland and Ukraine and also said that the border between these two countries should unite, not divide.

Patrushev also said that “a number of states are already actively working on the dismemberment of Ukraine.”

Earlier in Russia, they came up with a scenario according to which Poland, in collusion with the United States, seizes western Ukraine.

During the visit of President Andrzej Duda to Kyiv, Volodymyr Zelenskyy announced his intentions to simplify the border crossing between Ukraine and Poland.