Home / International / Putin said he wants the ‘war’ in Ukraine to end, acknowledging for the first time it’s more than just a ‘special military operation’

Putin said he wants the ‘war’ in Ukraine to end, acknowledging for the first time it’s more than just a ‘special military operation’ 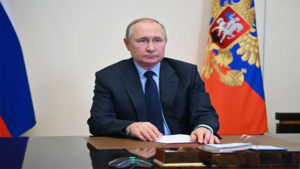 Much of the world has watched the war in Ukraine unfold with horror for ten months, but to Russian President Vladimir Putin, it wasn’t a “war” at all — at least until this week.

Putin on Thursday publicly acknowledged the situation as a “war” for the first time since the invasion was launched in February.

“Our goal is not to spin this flywheel of a military conflict, but, on the contrary, to end this war,” Putin said during a news conference Thursday. “This is what we are striving for.”

When the invasion began and in the months since, Putin has framed it as a “special military operation.” At various times he has said the “operation” was a defensive act against the eastward expansion of NATO or an effort to liberate ethnic Russians from “Nazis” in Ukraine.

Experts said Putin’s use of “special military operation” was part of his efforts to convince the Russian people they were not entering a war, even as Russia’s largely unsuccessful efforts to takeover large swaths of Ukraine and cities like Kyiv suggested otherwise.

Alexei Gorinov, a Moscow municipal councillor, was sentenced to seven years in prison in July after speaking out during a city council meeting about the children who were dying as a result of the war in Ukraine. In August, Yevgeny Roizman, a former mayor of the Russian city of Ekaterinburg, was detained and facing years in prison over his criticism of the war, including calling it an “invasion.”

Putin’s comment on Thursday — and the apparent reversal — was met with criticism from allies of those who were prosecuted for previously using the word “war” to describe the situation in Ukraine, according to The Washington Post.

“Alexei Gorinov was sentenced to seven years for calling the war a war at a meeting of the council of deputies,” Georgy Alburov, an ally of Russian opposition leader Alexei Navalny, said in a tweet. “Vladimir Putin today also publicly called the war a war at his workplace. So either release Gorinov or put Putin in jail for seven years.”

It wasn’t however the first time Putin has claimed he wants the conflict to end quickly. After Indian Prime Minister Narendra Modi criticized the war to Putin’s face in September, the Russian president responded: “I know about your position on the conflict in Ukraine, and I know about your concerns. We want all of this to end as soon as possible.”

Shortly after Modi’s criticism, the realities of the war were pushed to the forefront in Russia when Putin announced a partial military mobilization, drafting reservists to be sent to Ukraine to fight and prompting protests.