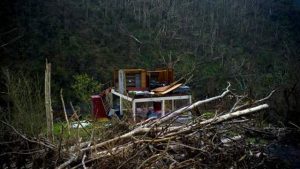 In this Saturday, September 30, 2017 photo, the foundation of a heavily damaged house stands in the mountains after the passing of Hurricane Maria in the San Lorenzo neighborhood of Morovis, Puerto Rico.

The official death toll from Hurricane Maria in Puerto Rico has increased to 34 from 16, the US territory’s governor said Tuesday.

Governor Ricardo Rossello also said he believes the hurricane that struck on September 20 with winds over 150 mph caused US$90 billion in damage across the Caribbean island.

The governor made the announcement at a news conference following US President Donald Trump’s short visit to the US territory to assess the storm’s impact.

During his stop, Trump congratulated Puerto Ricans for avoiding a high death toll of “a real catastrophe like Katrina.” As many as 1,800 people died in 2005 when Hurricane Katrina breached levees protecting New Orleans.

The governor said the death toll in Puerto Rico included 19 people who died as a direct result of the storm and 15 whose deaths were caused indirectly by the storm, local media reported.

Nearly two weeks after the storm, 95 per cent of electricity customers remain without power, including some hospitals. Some people have expressed concerns about the effect that extended outages will have on the ill and vulnerable in the tropical heat.

According to the Federal Emergency Management Agency, there are now more than 10,000 federal officials on the ground on the island, and 45 per cent of customers now have access to drinking water. Rossello has said he hopes 25 per cent of electricity customers will have power by the end of October.