Public weighs in on sacking of Antigua’s education minister 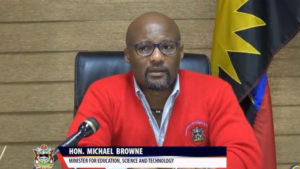 There are mixed reactions by citizens of Antigua and Barbuda on social media to the sacking of former Education Minister Michael Browne after he was arrested and charged by police today following their investigation into rape allegations made against him.

Shortly before 8:30am, Prime Minister Gaston Browne advised the governor-general of Antigua and Barbuda to revoke the former minister’s portfolio and appoint Darryl Matthew as education minister.

Members of the public agreed with the prime minister’s decision to fire his education minister.

One man posted: “The PM is right. NO ONE SHOULD HOLD OFFICE WITH SUCH ALLEGATIONS AGAINST HIM. His actions should be condemned since it will send a strong message to our nation’s youth.”

An Antiguan woman resident in Canada said: “Right is right and wrong is wrong. We cannot be condoning any type of violence and sexual exploitation. We celebrated International Day for the Elimination of Violence against Women yesterday and I think it is fitting that he was charged.

Supporters of the fired minister agreed that he should not be judged in the court of public opinion.

One woman posted: “Sad to hear Mr Browne! I have always respected you as my Minister of Education and will still continue to do so. Let him without a sin cast the first stone at you. We are All sinners! Stay strong and keep the faith!”

Another woman posted: In Antigua, you are guilty till you can prove you are innocent, then it’s prolonged for years and years to punish you. Justice deferred, is justice denied. [There is] no real Justice in Antigua.