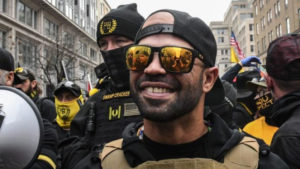 The group chock full of his followers has come to learn one lesson the hard way: ‘Trump was just a man.’

Far-right extremists are seething now that President Joe Biden has been successfully inaugurated as the 46th president of the United States.

The Proud Boys, a violent extremist group composed of some of former President Donald Trump’s staunchest followers, now proclaims the twice-impeached ex-commander-in-chief will go down in history as “a total failure.”

The New York Times is reporting that chatter on fringe social media sites like Gab and Telegram is dubbing Trump a “shill” and “extraordinarily weak.” Additionally, there are calls for supporters to stop attending his rallies or protests held in his name or by the Republican Party.

Founded in 2016 as a “club for men” who described themselves as “Western chauvinists,” the Proud Boys were catapulted to a national platform for several years of the Trump presidency after consistent demonstrations and violence in Charlottesville, Portland and Kenosha. Trump legitimized the group during the first presidential debate when he would not denounce them, instead famously telling them to “stand back and stand by.”

Additionally, the Proud Boys, along with several others, were active around the country throughout last summer, countering as disaffected citizens and progressive political organizations protested for racial justice.

One founder, Gavin McInnes, who also co-founded Vice, has since left.

Enrique Tarrio, another Proud Boys co-founder, was arrested two days before the deadly Jan. 6 insurrection on the Capitol Building. Tarrio was charged with one misdemeanor count of destruction of property in connection with the Dec. 12 burning of a Black Lives Matter banner stolen from Asbury United Methodist Church in Washington, D.C.

The group has been pushed to fringe sites since the recent booting of Parler from most web platforms and mainstream social media companies like Facebook and Twitter purge misinformation accounts, plus Trump has been permanently suspended from his favorite platform, Twitter.

Additionally, Trump supporters are particularly furious with the now-former president since he left office on Wednesday without pardoning anyone who participated in the Capitol siege. The Times report includes one message on Telegram that embodies the Proud Boys’ disenchantment with him.

“It really is important for us all to see how much Trump betrayed his supporters this week,” it reads. “We are nationalists 1st and always. Trump was just a man and as it turns out an extraordinarily weak one at the end.”