Pride and anger as Liverpool return to heroes’ welcome 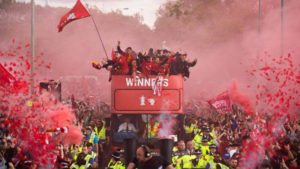 THOUSANDS of fans lined the streets of the city as double cup-winners Liverpool returned home for an open-top bus parade on Sunday (May 29) that took place amid a flood of conflicting emotions.

Winning both the League Cup and FA Cup in the 1 season, as Liverpool did by twice beating Chelsea on penalties in 2 Wembley finals, would be reason enough to celebrate for most clubs.

But the 2 trophies they really wanted, and which would have enabled them to claim an unprecedented quadruple in a single campaign, narrowly eluded Liverpool.

Manchester City pipped them to the Premier League by just a single point last week before Liverpool lost 1-0 to Spanish giants Real Madrid in Europe’s showpiece Champions League final in Paris on Saturday.

Supporters of rival teams were quick to point out Liverpool had failed to score a goal in regulation time in any of the 3 finals they had played this season.

But as the bus carrying players and officials displaying the 2 trophies won by the Reds this term made its way through the city amid loud cheers and a vibrant backdrop of flares and flags, defiant Liverpool manager Jurgen Klopp said: “This is the best club in the world.

“We lost a Champions League final yesterday and this is the reception we received. I really couldn’t care less what other people think. What a club,” the German added.

The result in Paris was overshadowed by chaotic scenes which delayed the kick-off at the Stade de France by over half an hour, with thousands of ticket holders struggling to enter the stadium as French police used tear gas on Liverpool fans.

As Reds supporter Richard Dickinson watched the parade go by, he told AFP: “There are several high-profile media people who have actually come out and talked about how badly fans were treated over there (Paris) and suggested it wasn’t the fault of Liverpool fans, which you know I can’t believe for a minute it would be.

“It’s a shame that it actually ruined the sport spectacle for so many, and what I’ve read it’s quite disturbing.”

Turning to Liverpool’s season on the field, he added: “I think the team has had a great year you know, unfortunate not to win all 4 trophies but we picked up 2 which is fantastic…Last night was unlucky, but you can’t fault the effort the boys put in!”

Fellow Liverpool fan Ashany Rehal expressed her pride in the team as she pleaded for Senegal’s Sadio Mane, linked with a move to German giants Bayern Munich, and Egypt’s Mohamed Salah to stay amid reports the 2 stars could be on their way out of Anfield.

“My favourite player is Mohamed Salah. I said to him ‘you’re really great and you’re the best and please don’t leave’“.

Earlier, Liverpool insisted their fans had done nothing to warrant the treatment they received outside the Stade de France, while French government figures criticised the behaviour of English fans and European football governing body UEFA blamed a problem with fake tickets.

Although no-one was seriously injured, the frightening scenes outside France’s national stadium prompted comparisons with the 1989 Hillsborough ground disaster at a Liverpool match in Sheffield, which caused 97 deaths in a crush and prompted a major overhaul of stadium safety standards.

Sunday was also the anniversary of another stadium disaster, when 39 people were killed at the Heysel Stadium in Brussels in 1985 as Juventus fans tried to flee Liverpool supporters.