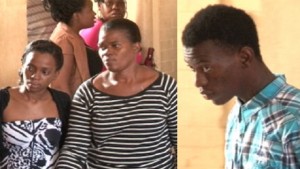 Krystal Thomas, her mother Sinfine Henry, and Jahmeil Sinclair were all remanded to prison.

GEORGETOWN, Guyana, Monday January 18, 2016 – Three more people, including the pregnant girlfriend of one man already charged, and her mother, have been charged in connection with the murder of British teenager Dominic Bernard.

Krystal Thomas, the 20-year-old partner of Bernard’s god brother Aaron Hing – who was previously charged along with friend Staymon George –, Thomas’ 39-year-old mother Sinfine Henry, and a fifth accused, 18-year-old Jahmeil Sinclair, were all remanded to prison when they appeared in court on Friday.

They are charged with assisting in committing the murder, and maintaining and harbouring Hing.

However, their attorneys are challenging the murder charge, arguing that based on the allegations against the trio, the charges should be conspiracy to commit murder and obstruction of justice.

The Guyana Chronicle quoted one of the lawyers, Nigel Hughes, as saying that he would take the matter to the High Court to be sorted out, since the police were “abusing their power”.

Bernard’s decomposed body was found in a shallow grave in Berbice on January 9, almost three months after he arrived in the South American country for the first time to spend time with Hing.

He landed at the Cheddi Jagan International Airport on October 14, and according to his father, Jamaican-born Andrew Bernard, was carrying a large sum of cash.

The young Bernard was reported missing by his parents after he failed to return to Britain on his scheduled November 5 flight. His father said when he spoke to his godson Hing, he claimed he did not see the teen and did not even know he was visiting the country.

However, Hing was arrested the same Bernard’s body was found as he tried to check into a hotel. George was also detained that day.

The two reportedly confessed to planning and executing the murder, saying the boy’s grave was dug even before he arrived in Guyana