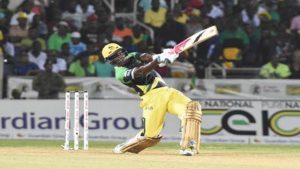 Jamaica Tallawahs players Rovman Powell and Chadwick Walton are optimistic of continuing their winning streak as the franchise makes its bow in the Florida leg of the Hero Caribbean Premier League (CPL).

The Tallawahs are to play St Lucia Zouks today at the Central Broward Regional Park in Lauderhill in a game scheduled to start 11:00 am Jamaica time.

The Christopher Gayle-captained outfit plays its second and final game at the venue in Lauderhill tomorrow in a 3:00 pm (Jamaica time) start. The encounter will bring an end to their campaign in the preliminary stage.

The Tallawahs, who lead the preliminary table, have already secured a spot into the knock-out stages of the Twenty20 (T20) tournament, with 13 points from eight games. The Zouks are currently eight points from as many games and are in contention for a play-off place.Powell, who celebrated his 23rd birthday last week, has been a spark in his maiden CPL season.

The middle-order batsman struck 44 from 34 deliveries in a victory over Trinbago Knight Riders at Sabina Park, and followed with a 14-ball, 34 not out against Barbados two nights later at the same venue.

He has also contributed useful spells with his medium- pace bowling and has been impactful in the field. “I’ve worked extremely hard to be where I am and it’s just for me to continue to learn and to continue to work hard. We’re looking to end this stage well with those last two games,” he said.

Powell does not mind the increased attention brought on by some eye-catching performances. “A lot more persons are talking about Rovman Powell and that brings a little additional pressure.

But I’m not fazed, it’s just for me to continue to improve as a cricketer. I’ve enjoyed it; it’s the most exciting cricket I’ve played, [in front of the] biggest viewing audience for me, so it’s something to enjoy,” he explained.

Walton, 31, endured a lean spell throughout the Tallawahs’ first seven games of the tournament. Bizarrely, he was run out three times, while on other occasions he went to soft dismissals though looking in good nick.

However, against the Tridents at Sabina Park he smashed the ball to all parts before being dismissed for 97 in the final over of the rain-truncated innings — falling agonisingly short of a maiden T20 hundred and also just off his highest score in the format of 99 not out.

“It was a disciplined innings; I really settled down and did some self-assessment and I went out and I delivered. I wanted to be one step ahead of the bowlers and hoping to get the singles while looking for the boundaries.

It was a bit disappointing (to miss out on a century) but I will always take 97 and a win, instead of a hundred and a loss. “It’s a different venue in Florida and a different day so I have to start from scratch and I have to go back to basics.

We are looking forward to these games because we just want to remain the number one team,” said the T20 opening batsman, who is also capable of keeping wicket.