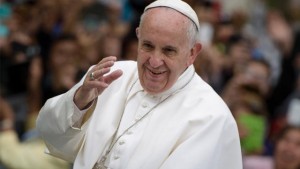 Pope Francis is bringing his message of dialogue with the Muslim world to the kingdom of Bahrain, where the Sunni-led government is hosting an interfaith conference on East-West coexistence even as it stands accused of discriminating against the country’s Shiite majority.

Human rights groups and relatives of Shiite activists on death row have urged Francis to use his visit, which begins Thursday, to call for an end to the death penalty and political repression in Bahrain. But it’s not clear if Francis will publicly embarrass his hosts during his four-day visit, the first of any pontiff to the island nation in the Persian Gulf.

The 85-year-old pope, who has been using a wheelchair for several months because of strained knee ligaments, said Thursday he was in “a lot of pain” as he headed to Bahrain, and for the first time greeted journalists travelling with him while seated rather than walking through the aisle.

Francis has long touted dialogue as an instrument of peace and believes a show of interfaith harmony is needed, especially now given Russia’s war in Ukraine and regional conflicts, such as in Yemen. On the eve of the trip, Francis asked for prayers so that the trip will promote “the cause of brotherhood and of peace, of which our times are in extreme and urgent need.”

The visit is Francis’ second to a Gulf Arab country, following his 2019 landmark trip to Abu Dhabi, where he signed a document promoting Catholic-Muslim fraternity with a leading Sunni cleric, Sheikh Ahmed al-Tayeb. Al-Tayeb is the grand imam of Al-Azhar, the seat of Sunni learning in Cairo. Francis followed that with a 2021 visit to Iraq, where he was received by Grand Ayatollah Ali al-Sistani, one of the world’s pre-eminent Shiite clerics.

Francis will meet again this week in Bahrain with al-Tayeb, as well as other prominent figures in the interfaith field who are expected to attend the conference, which is similar to one hosted last month by Kazakhstan that Francis and el-Tayeb also attended. Members of the regional Muslim Council of Elders, the spiritual leader of the world’s Orthodox Christians, Patriarch Bartholomew, a representative from the Russian Orthodox Church and rabbis from the United States are all expected, according to the Bahrain program.

The trip will also allow Francis to minister to Bahrain’s Catholic community, which numbers around 80,000 in a country of around 1.5 million. Most are workers hailing from the Philippines and India, though trip organizers expect pilgrims from Saudi Arabia and other neighbouring countries will attend Francis’ big Mass at the national stadium on Saturday.

Bahrain is home to the Gulf’s first Catholic Church, the Sacred Heart parish, which opened in 1939, as well as its biggest one, Our Lady of Arabia Cathedral. The church, with a capacity of 2,300, opened last year in the desert town of Awali on land gifted to the church by King Hamad bin Isa Al Khalifa. In fact, the king presented Francis with a model of the church when he visited the Vatican in 2014 and extended the first invitation to visit.

Francis will visit both churches during his visit and is likely to thank the king for the tolerance the government has long shown Christians living in the country, particularly when compared to neighbouring Saudi Arabia, where Christians cannot openly practice their faith.

“Religious liberty inside Bahrain is perhaps the best in the Arab world,” said Bishop Paul Hinder, the apostolic administrator for Bahrain and other Gulf Arab countries. “Even if everything isn’t ideal, there can be conversions (to Christianity), which aren’t at least officially punished like in other countries.”

But in the runup to his visit to Bahrain, Shiite opposition groups and human rights organizations have urged Francis to raise human rights violations against the majority Shiites by the Sunni monarchy. They urged him to call for an end to the death penalty and request to visit the country’s Jau prison, where hundreds of Shiite activists have been jailed.

Human Rights Watch and Amnesty International have repeatedly denounced the use of torture in prisons, as well as forced confessions and “sham trials” against dissidents.

“We are writing to appeal to you as the families of twelve death row inmates who are facing imminent execution in Bahrain,” read a letter from the families to Francis released this week by the Bahrain Institute for Rights and Democracy. “Our family members remain behind bars and at risk of execution despite the clear injustice of their convictions.”

Francis has changed church teaching to declare the death penalty inadmissible in all cases. He has regularly visited prisoners during his foreign trips, though no such prison visit is planned in Bahrain.

The Vatican spokesman declined to say whether Francis would raise Bahrain’s human rights record publicly or privately during his visit.