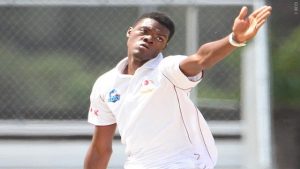 Rookies Nicholas Pooran and Rovman Powell are set to make their international debuts after being named in a West Indies Twenty20 15-man squad to face Pakistan later this month.

Both players were rewarded for stirring performances in the Caribbean Premier League and are the only new faces in the squad which will once again be led by emerging all-rounder Carlos Brathwaite.

However, marquee opener Chris Gayle will not feature after advising the Courtney Browne-led selection panel of his unavailability. The veteran left-hander was included for the hastily arranged two-match series against India last month in Florida but never played due to injury.

Opener Lendl Simmons has also been left out because of “medical reasons”, the West Indies Cricket Board said.

However, the bulk of the squad remains unchanged with the likes of star all-rounders Andre Russell, Kieron Pollard and Dwayne Bravo, along with off-spinner Sunil Narine, all named in the line-up for the three game series from September 23-27 in Dubai.

Pooran and Powell, however, were two of the stand-outs from the CPL, shining with the bat for their respective franchises. The left-handed Pooran gathered over 200 runs for Barbados Tridents with two half-centuries — including a top score of 81 — but more notably, a strike-rate of nearly 200.

Powell, meanwhile, continued to impress, playing a key role with 228 runs to help Jamaica Tallawahs win the Caribbean title. The 23-year-old right-hander, a clean and powerful striker of the ball, is also a useful seamer.

Selectors have also included fast bowler Jerome Taylor, who recently retired from Tests, after the Jamaican claimed 13 wickets for St Lucia Zouks at an average of 17 and an economy rate of seven.

Meanwhile, Test players Kraigg Brathwaite and Alzarri Joseph are set to make their One-Day International debuts after being named in the Jason Holder-led 15-man squad.

The 23-year-old Brathwaite, the Test vice-captain, averages 34 from 31 Tests and has become known for his obdurate, slow style of batting. However, he showed flashes of his aggressive side with a stroke-filled 94 from 122 balls against Australia in Hobart last December.

Joseph was part of the successful West Indies Under-19 squad which captured the ICC Youth World Cup in Bangladesh earlier this year, and he subsequently made his Test debut against India last month in St Lucia.

Still only 19 and with a mere nine first class matches under his belt, Antiguan Joseph is widely viewed as one of the most talented seamers in the Caribbean. Rising T20 star Evin Lewis has been named in the ODI squad for the first time while wicketkeeper Denesh Ramdin, recently axed from the Test squad, has been retained in the one-day set-up.

The three-match one-day series runs from September 30 to October 5, with the first two matches in Sharjah and the last one set for Abu Dhabi. A three-Test series follows the limited overs tour and will run from October 13 to November 3.