Pollard: 20 runs too many 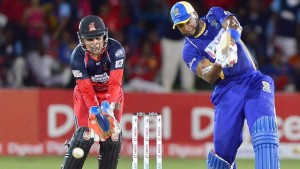 Kyle Corbin made his Hero Caribbean Premier League Twenty20 debut on Sunday night but did not have the impact his captain Kieron Pollard was hoping for.

Corbin made the Barbados Tridents’ starting XI for their clash against the Trinidad and Tobago Red Steel in the Hero CPL final after impressing Pollard with the energy and enthusiasm he brought to training sessions.

Pollard hoped the Barbados batsman could be the “X-factor” but as it turned out the number three faced 28 balls for 20 runs as the 2014 champions stumbled chasing 179 for victory. They were eventually restricted to 158 for four despite being in the good position of 82 for one after nine overs.

Speaking about Corbin’s inclusion Pollard said: “He has been batting pretty well in the nets and he was looking sharp in the net and in a final you want that energy, that X-factor. He gave us that in practice and I think he played his role. It is a final and he could have been that X-factor for us and it could have been a different story,” the Tridents captain explained.

Despite the loss, Pollard felt his Tridents had a good season but were too inconsistent at the back end of the tournament.

“It was a good season. It was a bit up and down in the back end but it is T20 cricket and the Red Steel had momentum coming down to the back end of the tournament and they ran with it,” he said.

The Red Steel were almost unstoppable at home, winning six of seven at the Queen’s Park Oval and six of their last eight matches overall to clinch the Hero CPL title for the first time

“We have been here before and these are the days we live for, to play in finals. We knew we were going to come up against a tough Red Steel team with the crowd backing them as well, so we knew we were in for a fight and we just weren’t up to scratch, these things happen. We don’t want to look for excuses. We were beaten by a better team tonight and they deserve all their congratulations,” Pollard added.

Asked where the game fell apart for them, the Tridents skipper said: “I just thought with our bowling effort we wanted to restrict them to around 150-160. They getting to 178 I think was 20 runs too much but having said that, we had a brilliant start. We got 60 odd in the first ten overs but I think we lost it in the back ten. One of the guys from the top order needed to bat all the way through to the end and we did not have that and we paid the price in the end.”