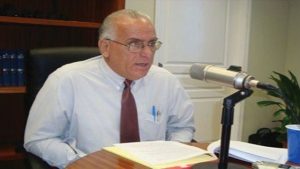 Operation Rescue’s Dwyer Astaphan, who helped fashioned the PLP/CCM/PAM coalition government, has accused Prime Minister and Minister of Finance, Dr. the Hon. Timothy Harris of “rhetoric and accounting gymnastics” with the finances of the country and called on him to release the IMF Staff Report.

Astaphan accused Prime Minister Harris of boasting about surpluses in the last accounting year of 2017 and every year he has been head of government.

Mocking Dr. Harris with his usual mantra of ‘surpluses, surpluses,’ the former government minister said while surpluses are good and better than deficits, a closer look might give a different perspective.

“The declared surplus in 2017 was EC$30 million, but of that amount, EC$17 million was granted to the government in budgetary support from the Sugar Industry Diversification Foundation (SIDF). Without that EC$17 million grant for budgetary support from the SIDF, the surplus would only have been EC$13 million. If you factor in the nearly EC$50 million paid out in 2017 by the SIDF to maintain the STEP programme, then you go from a surplus of EC$13 million to a deficit of EC$37 million,” said Astaphan in Tuesday night’s edition of the Operating Room which he hosts on WINNFM.

Astaphan further pointed out that “factoring in all the interest-free money from the SIDF that is held in government institutions including EC$18 million in term deposits in the Development Bank of St. Kitts and Nevis which provides no interest to the SIDF, then the deficit mounts even higher because it is very unlikely the Development Bank will pay back the SIDF any of that money.”

“The record shows that when the SIDF lends out money it hardly gets it back. It is running out of money. When you (Dr. Harris) talks of ‘surpluses, if you look at the figures closely and you look at the reality, they are not really surpluses. They are not really surpluses. They are deficits,” said Astaphan who further pointed out that the SIDF also helps out SKELEC, – the St. Kitts Electricity Company, SCASPA – the St. Christopher Air and Sea Ports Authority and other entities, using money which would otherwise come from Recurrent Revenue. It is more deficits.”

“What we are seeing here with his boast every year about surplus, is rhetoric and accounting gymnastics to paint a picture that is not totally accurate,” Astaphan told listeners.

He called on Prime Minister Harris to release the IMF Staff Report on the economy of St. Kitts and Nevis and the Ernst & Young Report on the SIDF.

“The Prime Minister says it (SIDF Report) is ready for a long time. Why not share it with us? Why are we not seeing the IMF Article IV Report on this country? What is the hold up?,” Astaphan asked.

The Washington-based International Monetary Fund (IMF) which concluded its Staff Mission Report on St. Kitts and Nevis in early July 2018, states the Prime Minister Harris has blocked the release of the Report.