Home / National / PM Douglas: “We want the Basseterre High School to settle down”

PM Douglas: “We want the Basseterre High School to settle down” 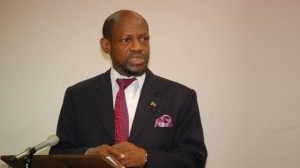 The Federation’s Prime Minister the Rt. Hon. Dr. Denzil L. Douglas has urged students and teachers of the Basseterre High School to assist the public authorities in implementing the critically important recommendation of having all relevant health reports submitted to the school nurse who is now on the spot or to the community health nurse so that a full analysis of the situation can be made.

“We are living in a scientific age, we receive complaints, we document them, we analyze them and we draw conclusions and influences as well and then make decisions. If there are complaints of a health nature, we would expect them to be reported to the nurse that is on the compound or to any community health nurse who can be reached and who would have the opportunity to document such,” said Prime Minister Douglas on the adjournment of Friday’s sitting of the St. Kitts and Nevis National Assembly.

He told lawmakers and the Nation in the sitting carried live on ZIZ Radio and Television that the protocol that has been outlined in the communication strategy developed by the Teachers Union, by the Basseterre High School and the Ministry of Education and which to a large extent reflects what have been developed by the stakeholders on CARPHA’s recommendation that this a reasonable one should be adhered to.

“As a government we will do everything possible and reasonable to ensure that all stakeholders are confident that the Basseterre High School reverts to being indeed a safe and stable school environment. In keeping with and maintaining its position as a leading educational institution in our federation, we give you our utter commitment; that is the members of this parliament that the necessary adjustments would be made in the interests of the greater good,” said Prime Minister Douglas, who called for a settling down of the situation.

“We want the Basseterre High School to settle down, students have to be taught and we want to make sure that the opportunities are being provided for such. Most of all, I give the teachers and the students at the Basseterre High School the assurance that you have my complete support and understanding and I look forward to having close interactions working with the teachers and with the students working together as we move forward to work with all to bring resolutions to this longstanding and very concerning matter,” said Dr. Douglas.

He said that the situation at the Basseterre High School has occupied the attention of the members of this Cabinet of the government for over two years.

Dr. Douglas, who chairs the meetings of the Cabinet said the Minister of Education, Sen. the Hon. Nigel Carty has been updating the Cabinet weekly on the issue since the very earliest of days starting with his request for support to mobilize CARIRI and then to finance massive renovations and upgrades to the Basseterre High School.

Prime Minister Douglas emphasized that as a medical doctor, he clearly understands the issues that are at play at the Basseterre High School.

“I have been moved by the reports about the school needing for my approval of all requested expenditure, now amounting to about EC$7 million dollars and still counting. In this issue again I emphasize as we have consistently said in our cabinet meetings, money must not be a limiting factor to get it right at the Basseterre High School. In fact, I have instructed my Financial Secretary to facilitate all justifiable request for financial support related to the Basseterre High School. And this is because we have given our parents and our guardians that we shall do our very best in providing learning opportunities to our students and to their children in an environment that is conducive to their health and also to that of the teachers,” said Dr. Douglas.

“I understand the real pain involved in these matters. I understand as well the emotional distress under which our teachers and our students at the school are being put and our parents as well,” said the Prime Minister, who noted:

“I was listening in particular to a lady, a parent, a mother expressing total disgust in learning that her son whom she had sent to school to learn was outside of his classroom, outside of the school apparently joining with others in a so called demonstration. It is that kind of distress and pain which is I am able to understand that was being expressed as I said just this morning I heard on the news by that particular mother. So it is not only distress on the path of teachers and students but also on the part of parents who want their children to go to school and learn.”

He noted that the management of the school and other stakeholder groups have placed on records their understanding of what the Ministries of Education and Health have done to address their concerns to date.

“They have been told, they have been shown, they have been a part of the decision making as to what needs to be done in order to address the concerns there. They continue however to exist in fear that something could be wrong with their school environment and this fear is being fed by those who are motivated to engage in destructive emotional abuse of the public over this particular matter,” said the Prime Minister.

He further suggesting that instead of creating undue anxiety, “we must demonstrate care and compassion for our teachers, for our parents, for our students and their families and serve their best interest in every way that we can.”

“Again I stress to all, let the school settle down. At all times on this matter, we have advised the Minister of Education to be open and to be receptive to the public health advice, but to be opened to responding to the anxiety that a situation like this one creates as well. I am a medical doctor; I understand the anxiety that can be created. We strongly believe that on matters on public health, we must seek the advice of local, regional and international health experts where necessary as a modern society is expected to do,” said Prime Minister Douglas.

He pointed out that Ministries of Health and Education have sought the guidance of two credible and impartial regional institutions – the Caribbean Industrial Research Institute (CARIRI) and the Caribbean Public Health Agency (CARPHA).

“We have asked them to do that time and time again and we are prepared to seek their further engagement in attempting to achieve a full resolution of this matter because again I emphasize as the Prime Minister of this country, that the Basseterre High School should be allowed to settle down. And all this that we have done and permitted to doing going forward because the only things that matter at the end of the day are the health and the wellbeing of the students and teachers and the reassurance of their loved ones that they are in safe working and learning environments,” said the St. Kitts and Nevis leader.