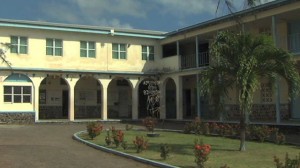 Prime Minster Douglas is calling the action of the teachers at the BHS irresponsible in not allowing the situation at the BHS to settle down. The PM said after a full analysis and assessment of the BHS was carried out over a period of time by two organizations , CARPHA and CARIRI agreed upon by the teachers, union, PTA having heard the reports that the school was now an environment conducive to learning.

PM further stated that it was not in the best interest of the students for the teachers to be spending their time out of the classrooms. Dr Douglas further indicated that if the teachers had continued symptoms from the BHS environment then they should request transfers. PM Douglas said that as a parent, a medical doctor and as Prime minister the school was a safe environment for learning, as a result of the findings from the CARIRI and CARPHA reports.