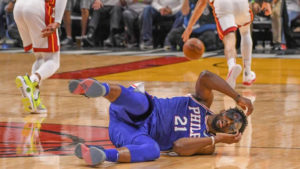 The New Orleans Pelicans defeated the Portland Trail Blazers 131-123 as they swept their Western Conference first-round playoff series, while the Philadelphia 76ers moved a step closer to advancing.

New Orleans claimed the series 4-0 thanks to Saturday’s victory, which was inspired by Anthony Davis and Jrue Holiday.

Davis scored 33 points in the second half as he finished with a franchise playoff-record 47, while Rajon Rondo added 16 assists.

The 76ers dropped the Miami Heat 106-102 in game four behind a triple-double from Ben Simmons.

Simmons got into a scuffle with Miami forward James Johnson which left everyone talking. The two players butted heads in the first half after Robert Covington fouled Goran Dragic hard.

That was not the end of it, either. Just seconds after Simmons’ altercation with Johnson, the rookie gave a shoulder to Dwyane Wade on a pick for an offensive foul. Things never cooled down, but the 76ers went on to overcome 25 turnovers to earn the victory.

Pelicans guard Holiday tied a franchise playoff record with 41 points, but Davis broke it. Portland’s C.J. McCollum finished with 38 of his own.

Utah Jazz guard Ricky Rubio posted a triple-double with 26 points, 11 rebounds and 10 assists in a 115-102 win over the Oklahoma City Thunder, who now trail 2-1 in the series.

WINSLOW STRUGGLES FROM THE FLOOR

Justise Winslow shot just three for nine from the floor with seven points. He finished with five fouls as well.

Wearing his mask, Sixers star Joel Embiid had possibly the most violent block of the postseason on Goran Dragic.

If LeBron James and the Cleveland Cavaliers are to progress, they will want to avoid another loss on the road to the Indiana Pacers on Sunday.