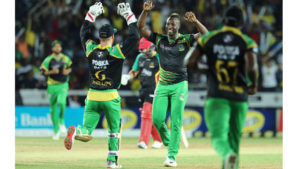 Early pacesetters Jamaica Tallawahs made it three wins from three in the 2018 Hero Caribbean Premier League (CPL) with a 47-run victory over St Kitts & Nevis Patriots on a night when run-scoring appeared at times almost impossible while at others six after six rained down on the Sabina Park stands.

What would prove to be the pivotal moment came relatively early in the game, approaching the midway point of the Tallawahs innings. Having been inserted by the Patriots, Jamaica were 77/2 when Ross Taylor, having made just 6 from 10 balls, skewed an attempted drive to long-off off part-time off-spinner Anton Devcich.

Devcich, though, had overstepped and the no-ball would prove costly; Taylor went on to blast an unbeaten 51 from 35 balls and take the game well beyond the Patriots.

Taylor and Glenn Phillips (41) both accelerated dramatically from slow starts to help power the Tallawahs to 178/4 from their 20 overs despite more brilliance from Nepal leg-spinner Sandeep Lamichhane (2/21) and some quality death bowling from Ben Cutting.

And this trend continued in the Patriots innings during a bizarre Power Play which saw the Patriots deal almost exclusively in sixes. When the score reached 29/2 after five overs, 24 of those runs had come from just four strikes, while Evin Lewis – who now has 47 runs in his last eight T20 innings – and Tom Cooper had departed to high-class fast bowling from Oshane Thomas (1/26) and Krishmar Santokie (2/13).

Chris Gayle – who spent most of the Tallawahs innings off the field with an injured hand – was remarkably watchful against that pair, collecting just a single run from the first 15 balls he faced but then struck three sixes and a four from his next eight before slicing off spinner Steven Jacobs to short third-man to leave the Patriots three down inside the first six overs and with too much work to do.

Wickets continued to fall at regular intervals – the first six to six different bowlers – as the likes of Devon Thomas, Devcich and Cutting all tried and failed to breathe life into the Patriots innings.

Adam Zampa snuffed out any hopes of a Patriots recovery when he ended a promising partnership between Carlos Brathwaite and Mahmudullah (22) with a googly that foxed the Bangladesh star and knocked back the off stump before the impressive Imad Wasim (2/21) truly ended the contest when he had Brathwaite smartly caught in the deep by Rovman Powell.

With the game gone, Sheldon Cottrell enjoyed himself with a couple of huge sixes late in the innings before being cleaned up by the returning Santokie.

The Tallawahs made a fine start with the bat, Kennar Lewis grabbing his opportunity at the top of the order after injury ruled out Johnson Charles.

Having been the support act for Andre Russell’s match-winning performance against Trinbago Knight Riders back in game three, Lewis was the early star here as he dominated a Power Play that brought the Tallawahs 58 runs without loss before he fell just short of a half-century on 49 from 25 balls.

After a tidy opening over from Cottrell, Lewis took charge. He drilled Jeremiah Louis’ first two deliveries straight back down the ground for six and four, and the big man showed there was more to his game than brute force with a delicate cut shot for four more.

A mixed bag of an over from Devcich saw some short, wide deliveries go unpunished but also another six down the ground, while Lamichhane was dispatched over midwicket.

Lamichhane took centre-stage and his revenge in his next over. After a fourth six of the night for Lewis, he perished looking for number five as Tom Cooper held a smart catch at long-off. Andre McCarthy was trapped lbw propping half-forward to a googly very next ball.

That left this Caribbean clash with a distinctly New Zealand flavour as Taylor joined Phillips in the middle with Devcich bowling.

And Devcich looked to have struck when he had Taylor caught at mid-off only for TV replays to confirm the foot fauly.

Phillips duly deposited the resulting free hit over the ropes at midwicket, and it instantly felt like a key moment. As well as letting Taylor off the hook, which would prove so costly later, it also gave Phillips momentum as Jamaica suddenly jumped from an apparent 77/3 to 84/2.

That significance was confirmed in the very next over when Phillips launched Cutting for another pair of sixes. Both were hit straight – the first brutally back over the bowler, the second somewhat fortuitously over the keeper. But the momentum shift was clear. From 15 off 21 before that free-hit, Phillips suddenly had 38 from 29 and the Tallawahs were beyond 100 with nine overs still to go.

Things would shift again, though. With the innings slipping away from them, the Patriots turned again to their champion leg-spinner Lamichhane to change things. He may not have got the breakthrough himself, but he certainly did his job in an over that brought the Tallawahs only a single. Phillips duly aimed a huge slog at the first ball of Cutting’s follow-up over and was dismissed lbw, although replays suggested the ball would have gone on to miss leg stump.

Lamichhane ended with figures of 2/21, just four runs coming from his final two overs at a time when the Tallawahs were looking to kick on. From 102/1 after 11 overs, Jamaica only made it to 113/3 from 15.

Something had to give, and it was Taylor who made his move. Cottrell’s return to the attack was greeted with successive sixes, the first uppercut over backward point and the second smeared over square-leg.

Like Phillips before him, Taylor had gone straight from first gear to fifth as a third six in four balls disappeared over deep midwicket when Brathwaite returned to the attack. It was all action now as Powell launched Brathwaite for successive sixes before falling to a catch in the deep looking for a third consecutive Hero Maximum.

Cutting kept things impressively tight at the death, but Taylor was able to get through to his half-century in the final over and really make the Patriots pay for the let-off he was given when he had just 6 to his name.