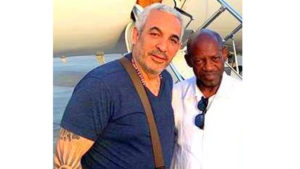 Government Minister Ian Patches Liburd is weighing in on the Alki David/Dr. Denzil Douglas alliance as it relates to starting cannabis cultivation for commercial purposes on St. Kitts. He says the big question is, what is the role of the Opposition Leader in this proposed venture?

“What we need to ask really is what is the role of the Douglas Labour Party and in fact, Denzil Douglas, in this matter? And that’s a pertinent question because what we have been forced to reflect upon is the hypocrisy of this man called Douglas who obviously is unfit to ever lead this country again, because the information would seem to suggest that these men were invited by the Douglas Labour Party.

“As a matter of fact, Denzil Douglas did make mention that he that he knew Alki David; when you investigate further you’ll find that this man Douglas has such a double tongue that after apparently inviting these two billionaires to St. Kitts and Nevis, would you believe Douglas would say we have the capacity to invest, yet he has brought in two billionaire investors? But don’t lose sight of the fact that Denzil Douglas came with a smoke screen before the arrival of these people trying to suggest that he was going to be arrested.”

The Minister went on to paint the potential investors in a negative light, citing the April 16th $11.1 million-dollar judgment against David in a sexual harassment suit brought by a female employee, and alleging that David’s partner in the proposed cannabis company for St. Kitts, Chase Ergen has been issued numerous St. Kitts and Nevis passports over a five-year period under a then Dr. Denzil Douglas-led administration.

“The Right Honorable Denzil Llewelyn Douglas was photographed with these billionaires, Alki David and this good gentleman Charles Ergen at times and I understand in recent times he’s Charles Edwards. I am aware as well, believe it or not the information provided to Straight Talk indicates this Charles Ergen, now known as Charles Edwards, between 2010 and 2015 has been issued some eight St. Kitts and Nevis passports, one of which I am advised is an official passport and I understand that his last passport was issued in January, 2015. Could you imagine one individual issued some eight passports total. I am also advised that he has in his possession as well two US passports- so lots of things to investigate.

“And to get you updated on this man called Alki David I went to Inside the News and he was referred to as one of the worst bosses in the United States and he was charged just recently $11 million for this. That is the man Douglas and his Labour Party is associated with.

“What are the plans for this association? Is this the kind of investor we need in St. Kitts and Nevis.”

Prime Minister Dr. Timothy Harris has also made reference to the would-be investors as illicit actors, international business predators and pirates, who are being aided by unsavory local to venture into cannabis cultivation to the detriment of locals.

Alki David has claimed however that since the Prime Minister’s lambaste in the National Assembly last Thursday, Dr. Harris met privately with both men at their hotel on Sunday to discuss their planned cannabis business.